Largely due to the careful introduction of Archie to the world of boating and the world in general, we have stayed at home for longer than we might otherwise have done this year. Since his arrival at the beginning of March we had played him engine noises in the kitchen. Then we began taking him on the half hour drive to the mooring several times a week. 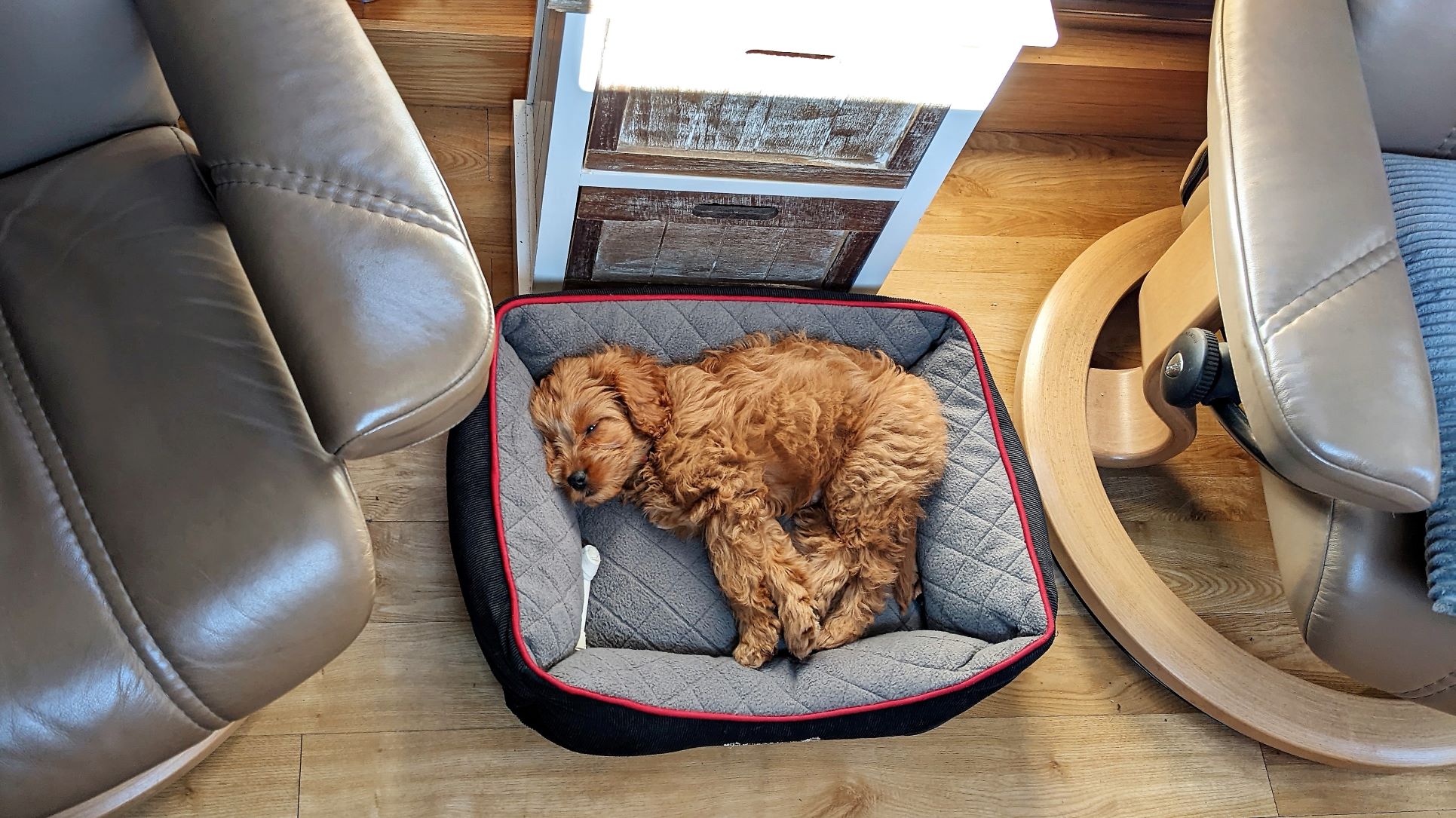 Getting Used To The Boat

We brought him on to the boat, then started the engine, then moved the boat and even took it twenty minutes down the cut to wind and return to our berth again. 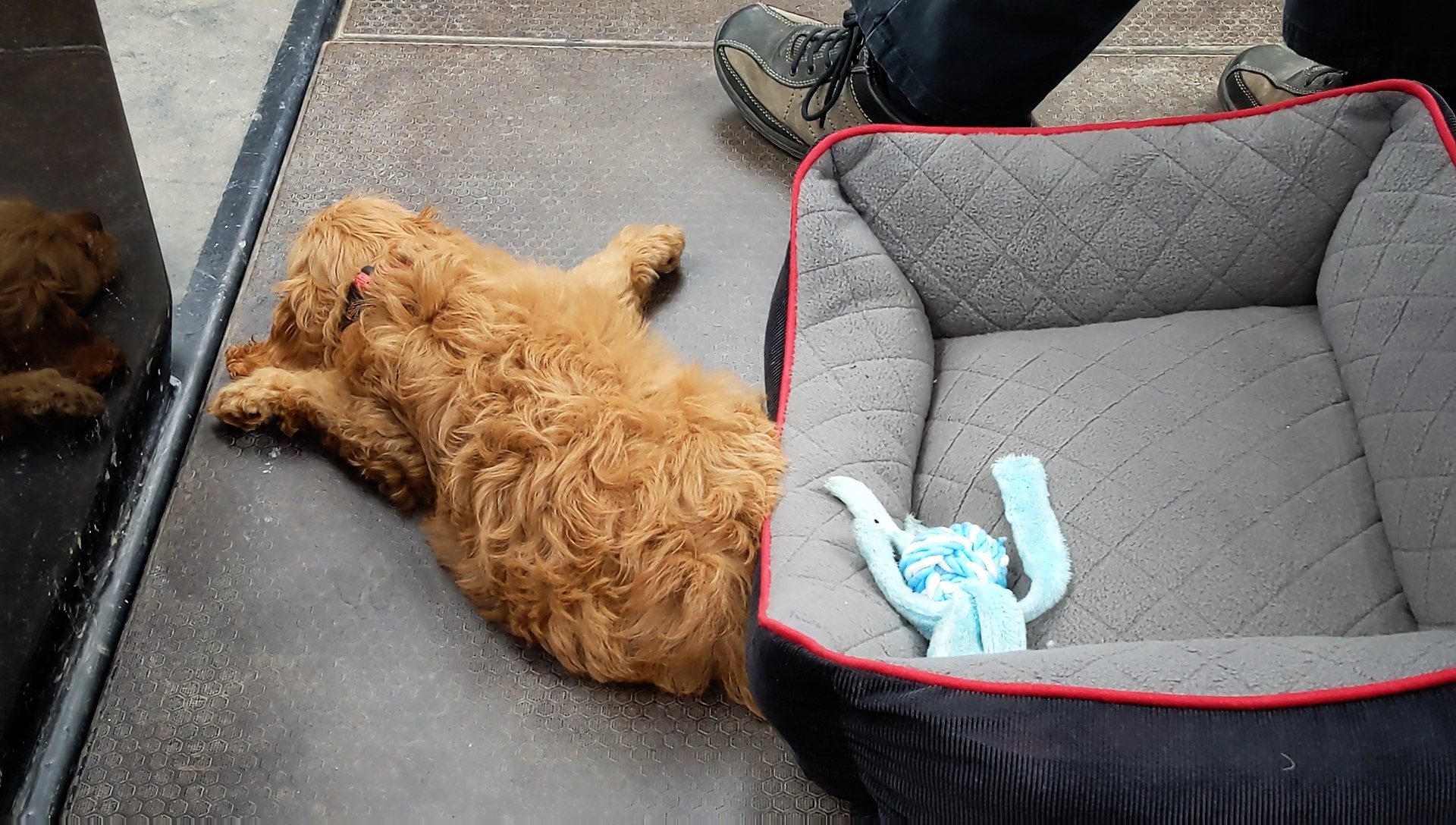 Relaxing On Top Of The Running Engine

After three weeks or so we had a trip up to Kingswood Junction, turned round and stopped off at the Tom O' The Wood pub on the way back to the mooring. As that was successful, a week or so later, we felt bold enough to try an overnight trip.

At boat speed and these short timescales there isn't much variety, so it was down to the winding hole above Hatton Locks, an hour or so back past our own berth to moor outside the Tom O' The Wood pub. After a morning of warm sunshine we had set off in sleet and hail. It soon cleared but stayed cold so we went inside and found a perfect seat by the fire, where Archie soon became the star attraction. Kids, babies, other dogs, strangers stroking him while chewing, he took it all in his stride. 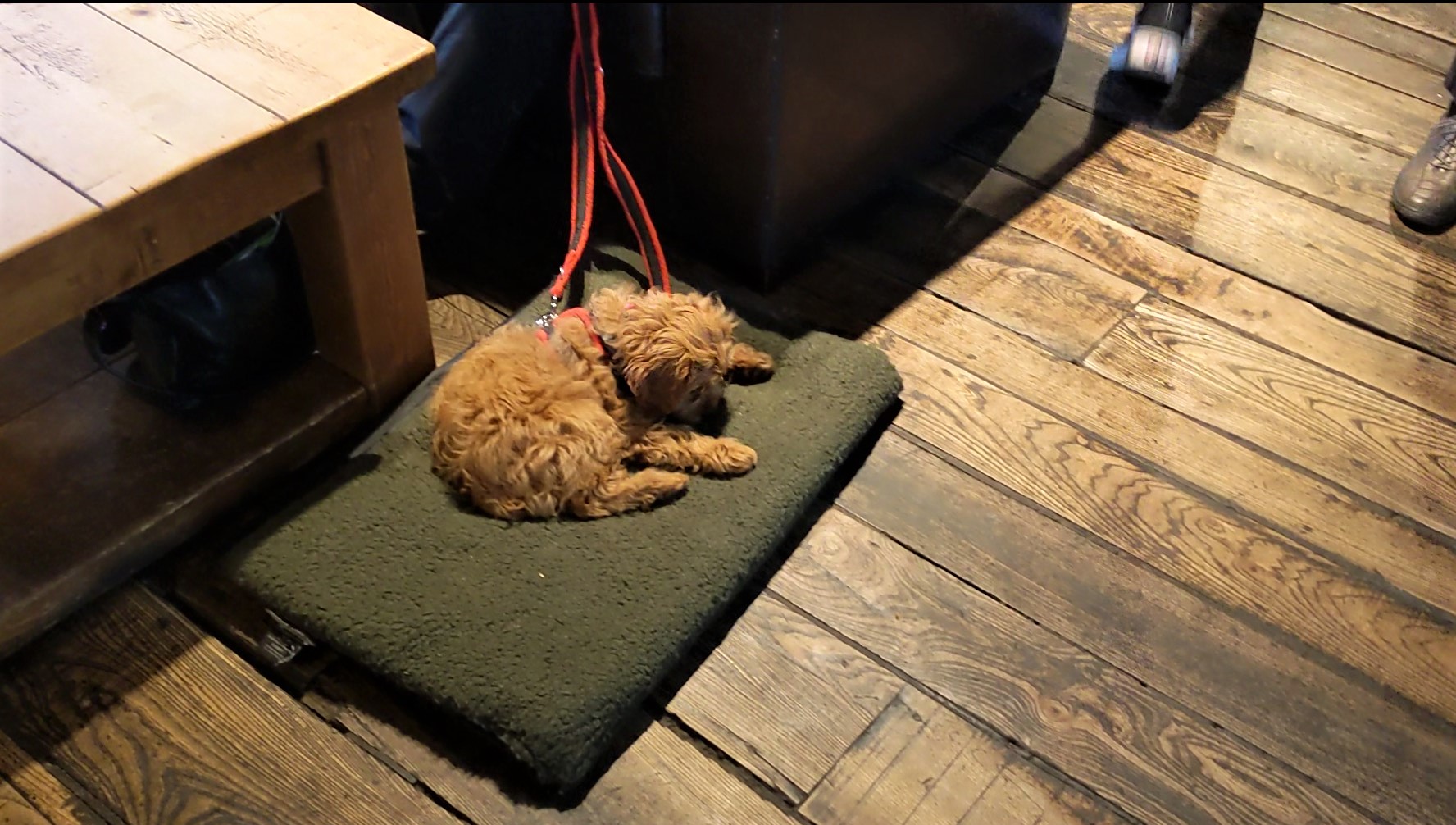 Getting Used To Pubs

Having braced ourselves for the night on board that, too, actually proved fairly uneventful so we went straight on to the next big test.

Going through locks is rather different to just cruising along. People get off the boat and disappear, there is a lot of water-rushing noise and more manoeuvring, with the engine revving and switching from forward to reverse and back again. Depending on which way you are going you are either going into a dark cave entrance, only to emerge into the daylight once the lock is filled or else sitting in the open air and suddenly descending into a dark, wet, noisy pit as the chamber empties out.

Kingswood Junction, where we had winded previously, is the entrance to the Lapworth Link from the Grand Union to the Stratford Upon Avon canal. At the far end, instead of one straight T-junction, the Stratford canal coming down from Birmingham has one lock down into Lapworth basin to continue on the Stratford and an alternative descending onto the Lapworth Link for traffic heading for the Grand Union. You can pass through the link to the basin, turn right to go up one lock, then take a very sharp right at the top and come down the other. Thus Archie could be exposed to a couple of locks, one up and one down, without being committed to going through loads more if he started to freak out.

The next morning, we left our mooring by the pub and tried this two lock manoeuvre, none of which seemed to worry a twelve week old puppy at all. 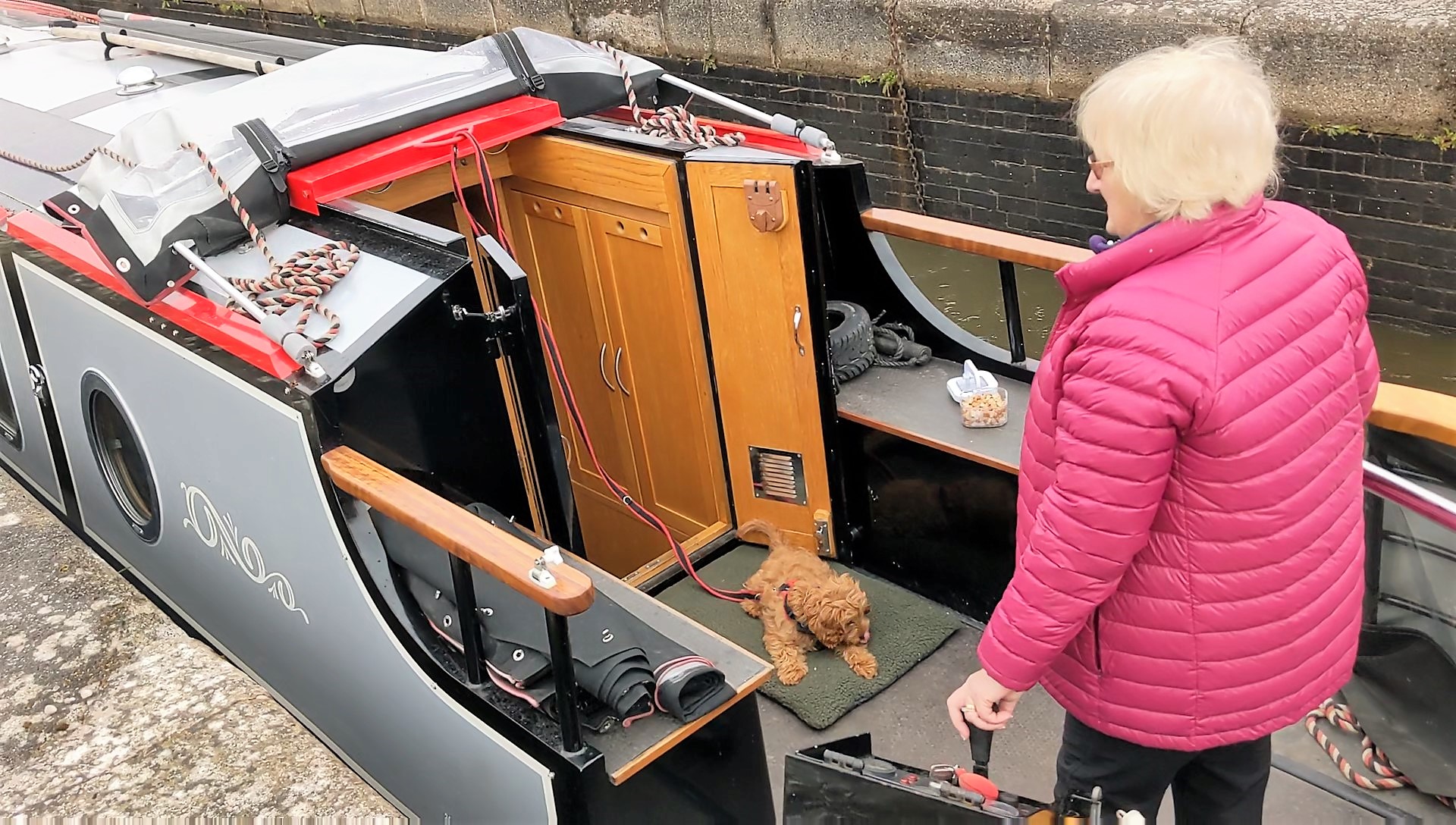 It was all over in a little over an hour and we were back at the mooring we had just left, so we stopped at the same place and had a walk for an hour or so before a quick visit to the pub, where Archie had certainly not been forgotten, before returning to the yacht club.

That had gone quite well, all things considered, as did another little trip a few days later, which ended back at the yacht club but we stayed there overnight ready for an event that had been organised for the next day. That saw Archie mingling with lots of new people and many dogs of all sizes and temperaments, which, again, he took in his stride. 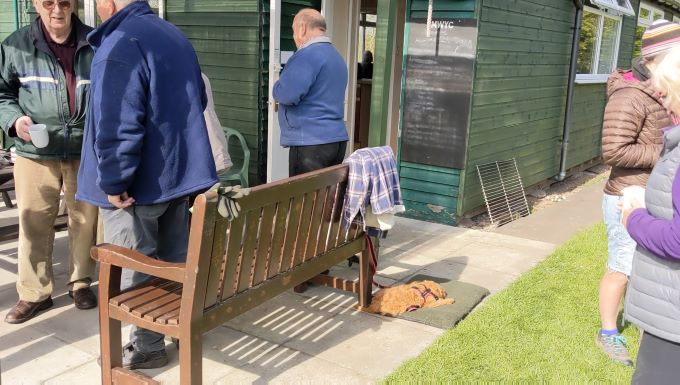 As a final test, a couple of days later, we set off on a longer journey. Up the Grand Union to Knowle Locks, a flight of five locks, notorious for the effects of the wind and double the size. Having got to the top we went through the other side, almost as far as Catherine De Barnes, to turn around, spend the night on the boat and make the trip back down Knowle Locks the next day. This time we stopped for lunch at The Navigation in Lapworth and again Archie seemed quite relaxed.

It may seem that these boat trips involved visiting a lot of pubs. It has to be stressed that these visits were part of a rigorous training plan we were forced to enter into to ensure that Archie was properly socialised to such settings and could relax in busy and noisy environments. As you can imagine, this has been quite a chore for us!

As well as stops while out boat training he was a regular visitor to The Red Lion in Hunningham, became familiar with the Buck & Bell in the village, visited The Merrie Lion in Fenny Compton and had two long lunches at The Lion at Wendlebury. 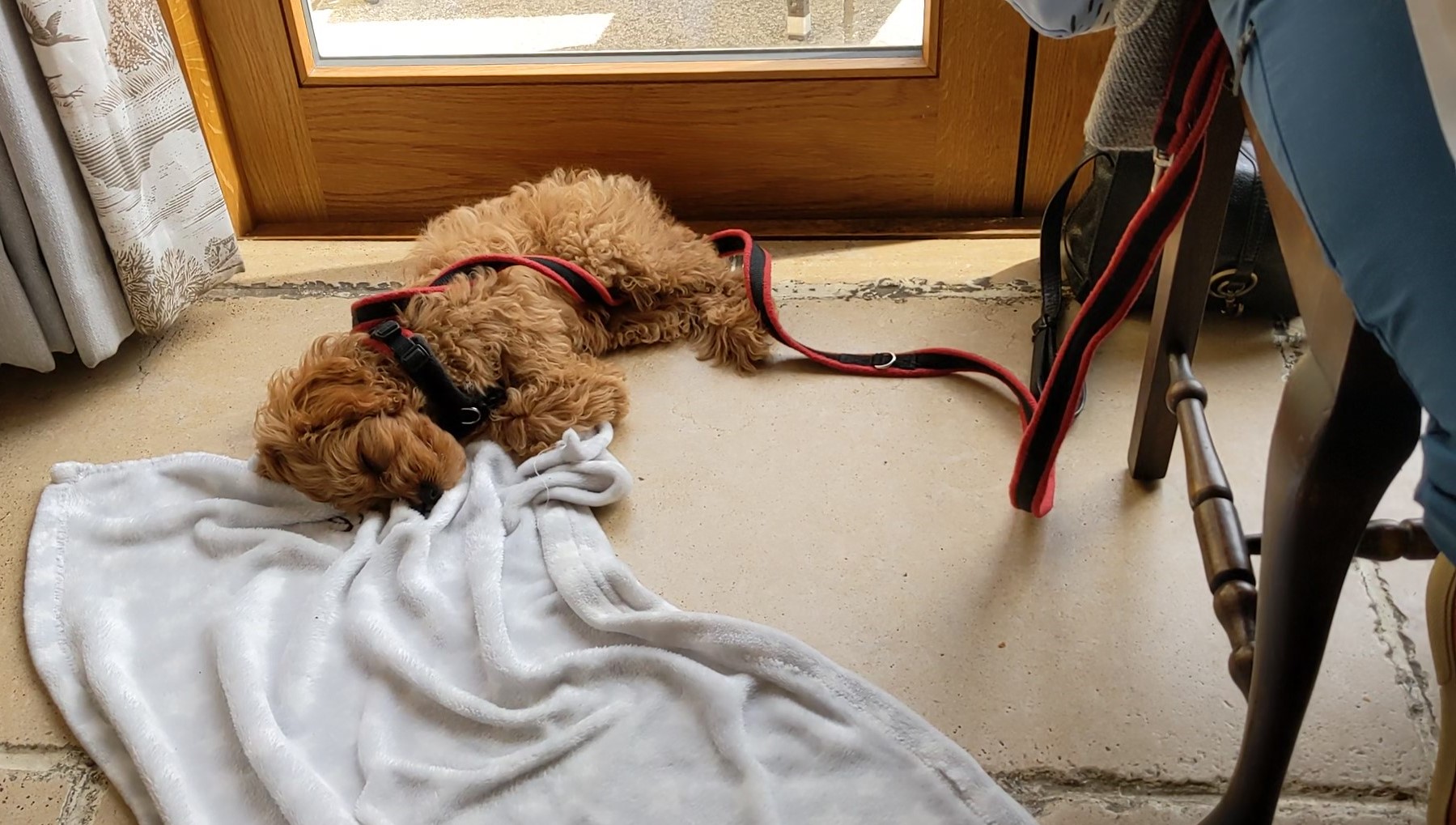 So far he has passed all these tests with flying colours.

Being on the boat, travelling on the boat, being able to relax in a noisy bar are all important aspects of a dogs life but he has to put up with all sorts of strange sights and sounds and will need to travel in different ways.

As soon as he arrived home and had settled in we started to carry him around. Showing him busy roads, thundering lorries, noisy children and everything else we could think of.

He came on the weekly trips to the supermarket and was walked around the busy carparks, in and out of the trolleys and was bothered by any number of strangers who couldn't resist stroking him as they walked past. If we had a pound for every time a grumpy-looking stranger would look at Archie and suddenly start smiling it would almost have paid for him by now.

We took him to Hatton Station to watch the trains thunder through. Then a trip to Warwick and back, then as far as Leamington Spa before the big one, a return trip by train to Stratford Upon Avon. None of which seemed to bother him that much at all. 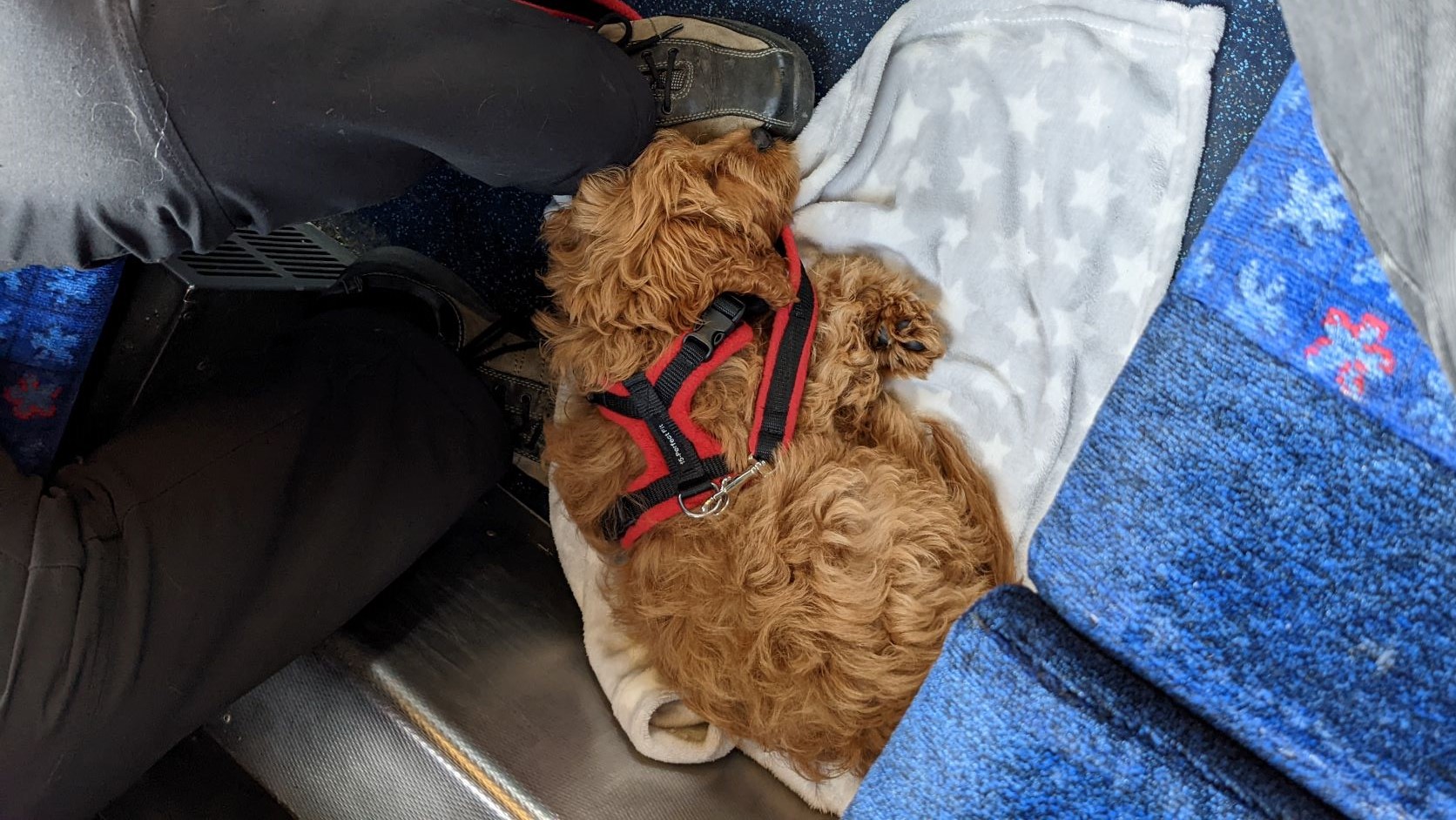 Once he was old enough and fully vaccinated, against everything but COVID, he could walk outside for himself and puppy classes were an obvious socialisation tool. Being pounced on by a giant, over-friendly Labrador over whom his owner appeared to have no control at all, made him a little nervous of other dogs for a while, which was exactly what we were trying to avoid. For the next few sessions he would retreat to the chair by us as soon as he could and just watch the others practising. Gradually he started to get over it, though and by the end of the six week course was just about ready to get out there and mix it with them.

So far, the main Achilles heel seems to be car travel. In the crate in the back of our car he often seems to get anxious and while not sick he does seem to start to drool anxiously. In a taxi, held in our arms or on the floor he seems fine, so we think he just might not like travelling in the crate and we are going to have to try some alternatives. However, that shouldn't be a problem while we are on the boat.

All of this preparation was important as we were booked to take the boat to have the hull blacking renewed, a regular maintenance task every few years to avoid corrosion, at the start of May. The yard was about a week's cruise away, near Nuneaton and we would have to leave at the start of the last week of April to get there on time. We needed to decide if Archie could manage the trip. After all of this we felt he could, so we prepared accordingly.