Back on the Grand Union at Gayton Junction for the last week of September we had about six weeks before we expected to be able to return to our winter mooring at the boat club by Hatton Station. We didn't have a specific plan for where to go in the meantime, so that was one thing we turned our attention to in the next few days.

Sunday was warm and sunny, once a heavy autumn mist had cleared away and we did some maintenance and even started to polish the outside paintwork for the first time. The smell from the Gayton Marina pump-out facility seemed unusually strong so we were keen to move on in the fine weather, starting with a visit to the service wharf on the junction. As we were about to move on "Gerty" arrived from the north. They had just picked the boat up after having the hull freshly blacked and it was interesting to watch them manoeuvring gingerly into the arm trying to protect the lovely fresh bitumen from scraping against the concrete side of the wharf. We suspected they would be much more gung-ho in a few days' time.

We had contacted the engineer that Beta Marine had put us in touch with, who lives in Nether Heyford which is a village we really like to moor near, so we headed down there intending to stay for a couple of nights at least. It really was a lovely cruise in warm, autumn sunshine and we found that our favourite mooring spot was free and waiting for us to tie up. We managed to round off the day with a nice walk in the sun, round into the main village, stopping off at the Foresters Arms for a couple of pints before returning to the boat.

Monday started with heavy rain at seven o'clock but that had cleared after breakfast and didn't return until late afternoon. In between, it was quite a nice day albeit with a persistent strong wind. We managed a walk through Nether Heyford's back streets and across to Bugbrooke, circling back to the boat along the towpath. More chores & polishing jobs were accomplished in the afternoon but the engineer let us know he wouldn't make it and promised to come by first thing next morning.

He did exactly that, was prompt and professional and went through the issue carefully. Ultimately, however, he was as confused as we were. He could suggest an approach that would probably cure the symptoms but it was not one that was normally needed with this set up and it would bring its own complications without really addressing the root cause. It didn't take that long to talk through it and he didn't charge us anything for the call, so while we were no further forward we had lost nothing in the attempt. We concluded that it was time to cut our losses, accept that this was just a unique issue for our boat and resign ourselves to continuing to manage the symptoms as we already had been.

In the meantime we had decided on a plan, of sorts. We would continue up the Grand Union and onto the North Oxford at Braunston. We would follow that to Hawkesbury Junction, take a side trip to Coventry and then head on down the Coventry Canal to Fazeley Junction. A turn on to the Birmingham and Fazeley Canal, heading South would lead us down into the centre of Birmingham. A couple of days of what passes for civilization in the West Midlands would be plenty and set us up to leave via the Worcester & Birmingham heading South to join the Stratford Upon Avon Canal at King's Norton Junction. From there we would follow the North Stratford essentially South-East as far as Briar Cottage in Lapworth, where we had moored up securely and cheaply once before. While waiting for our winter mooring at the yacht club by Hatton Station to become available, we would take a trip down to the deep South to catch up with family and friends before a final short hop through the Lapworth Link on to the Grand Union and down to Hatton. Hopefully, the little map will help! 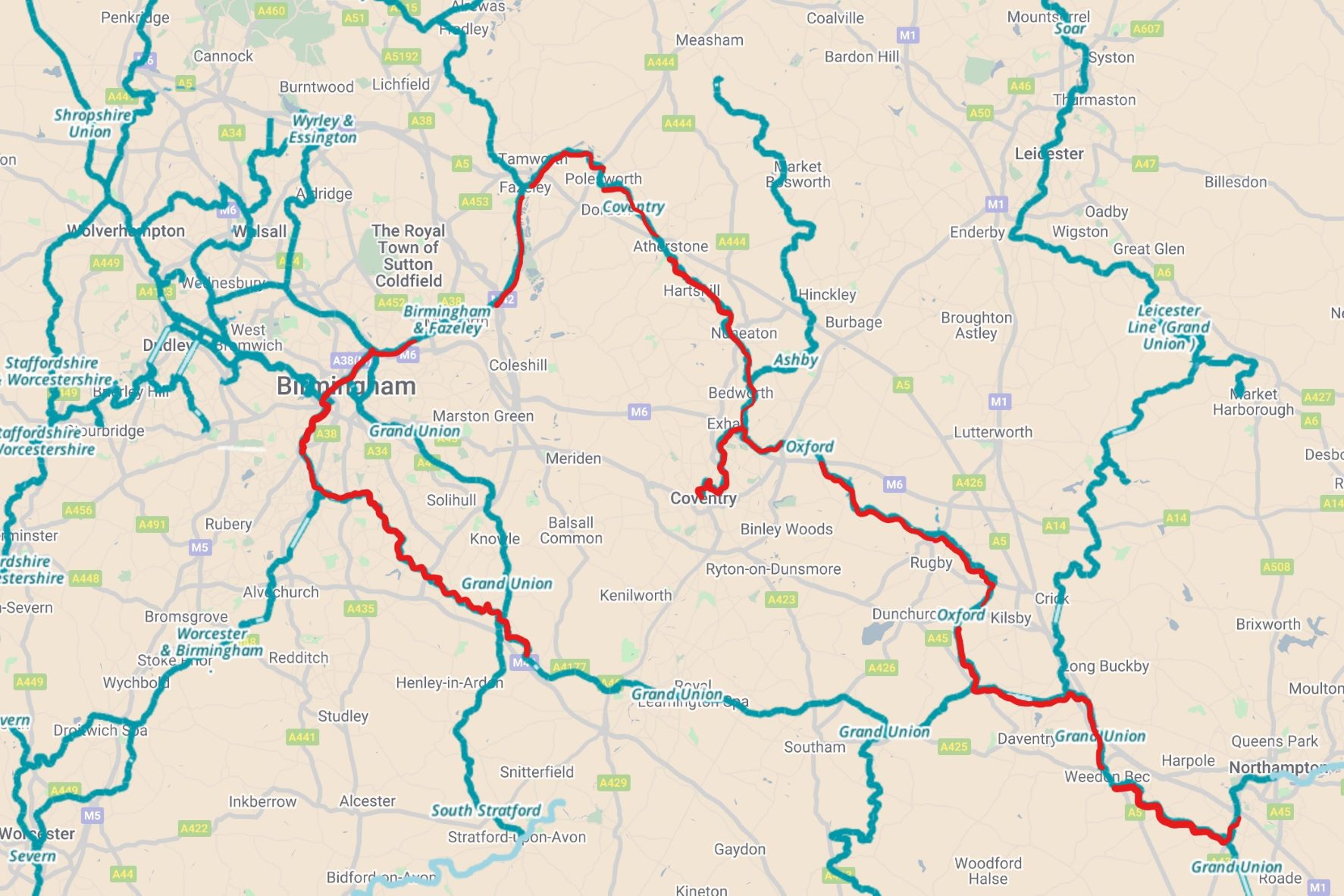 None of this was expected to be done in a rush, of course!

Having come up with an outline plan we set out after Justin The Engineer's visit on Tuesday morning and had an easy, pleasant cruise up to Whilton Marina, moored up and enjoyed a nice lunch at the Garden Centre next door. We were back on board and securely buttoned down for the heavy rain that started in the afternoon and continued well into the night.

Wednesday the twenty-ninth of September started dry but cold, a warning that winter was coming! We made our way up the flight of seven locks from Whilton to just below the top lock at Buckby. Despite a poor forecast there was a enough dry weather for a walk in the afternoon and a visit to The New Inn before dinner. This had become a favourite when we had been moored in Crick Marina, partly due to its hearty menu, which included a very wide range of dishes each with the option of "half and half".  That is half chips and half rice, something we were told was quite common in the North. There is new management in place now and we were sad to see the menu had been pared down to the bone, with only the most basic selection and "half and half" firmly off the agenda.

Thursday's trip consisted of one lock and about a mile and a half. Rain threatened and we could use the time for a supermarket shop in Daventry. We got up to the mooring at Welton Lane in the dry and Sue walked up to Tesco and got a taxi back to the bridge. In the afternoon I thought I could beat the odds with a walk out around the reservoir and back along the towpath but the house won, with a heavy storm just as I had reached the furthest point.

From a most unpromising start, Friday developed into a really nice, sunny day and a stunning evening. We moved up through the Braunston's famously kinky tunnel and passed two boats going the other way without touching a thing! Dropping down the six lock flight into Braunston we moored up in time for a catch-up Zoom meeting with some boating friends at home and abroad before a walk around the marina and the village there.

Saturday was rather a contrast. I got out for a walk in the morning but rain soon set in as predicted and we stayed put as we had intended. There is never an excuse to do nothing on a narrowboat so this was a chance to sand down and varnish the bow doors out into the well deck. These are often kept open with the cratch cover up to ensure access to the boat from the bow and so soon become quite weathered. Luckily a couple of coats of yacht varnish are easy to put on and make it look like new again.