Where To And When?

Over the month of May, both our second jabs had been jabbed and we had, at last, been able to visit our children, grandchildren and my old barber in Caterham (first haircut in ten months - quite a relief!). We had also taken the opportunity to meet a few old friends, as many as the rule of six would allow.

At the same time we had made a decision about this year's cruising. Original thoughts of heading west and then coming back up the Kennet & Avon Canal were abandoned. We know it is a very busy summer route normally. It seemed probable that staycation fever would render it uncomfortably congested. A route that far fewer people seem to go for is to the east. From the Grand Union there is an arm to Northampton and the River Nene which allows you to reach Peterborough, Ely and even Cambridge, so we set about investigating that. There is a patchwork of different authorities and organisations who have jurisdiction over various different waterways on the route, each with some form of licensing fee to be considered and none of which seem particularly joined up. Sue spent a lot of time working through all these and identifying the pieces of the puzzle and that allowed us to work out what we needed to put in place.

The first part of our plan was to leave on Sunday, the thirtieth of May and the second was to take our time. The plan didn't really go much beyond that but we knew we would have to start by dropping down to Kingswood Junction and then down Hatton Locks, a flight of twenty-one locks altogether, before proceeding through Warwick and Royal Leamington Spa and past our house at Long Itchington. We decided that we would keep the car with us until then and leave it at the house as we passed through. This would ensure it was easy to take back the things we realised we should never have brought and collect the things we now realised we should have packed in the first place.

We took a couple of days to cover the five or so miles to the Hatton Flight, stopping at Tom O' The Wood on the way and positioning the car at Hatton Station for later collection. Walking back we had a look at Shrewley tunnel, with the horse tunnel alongside it, from the land for the first time. 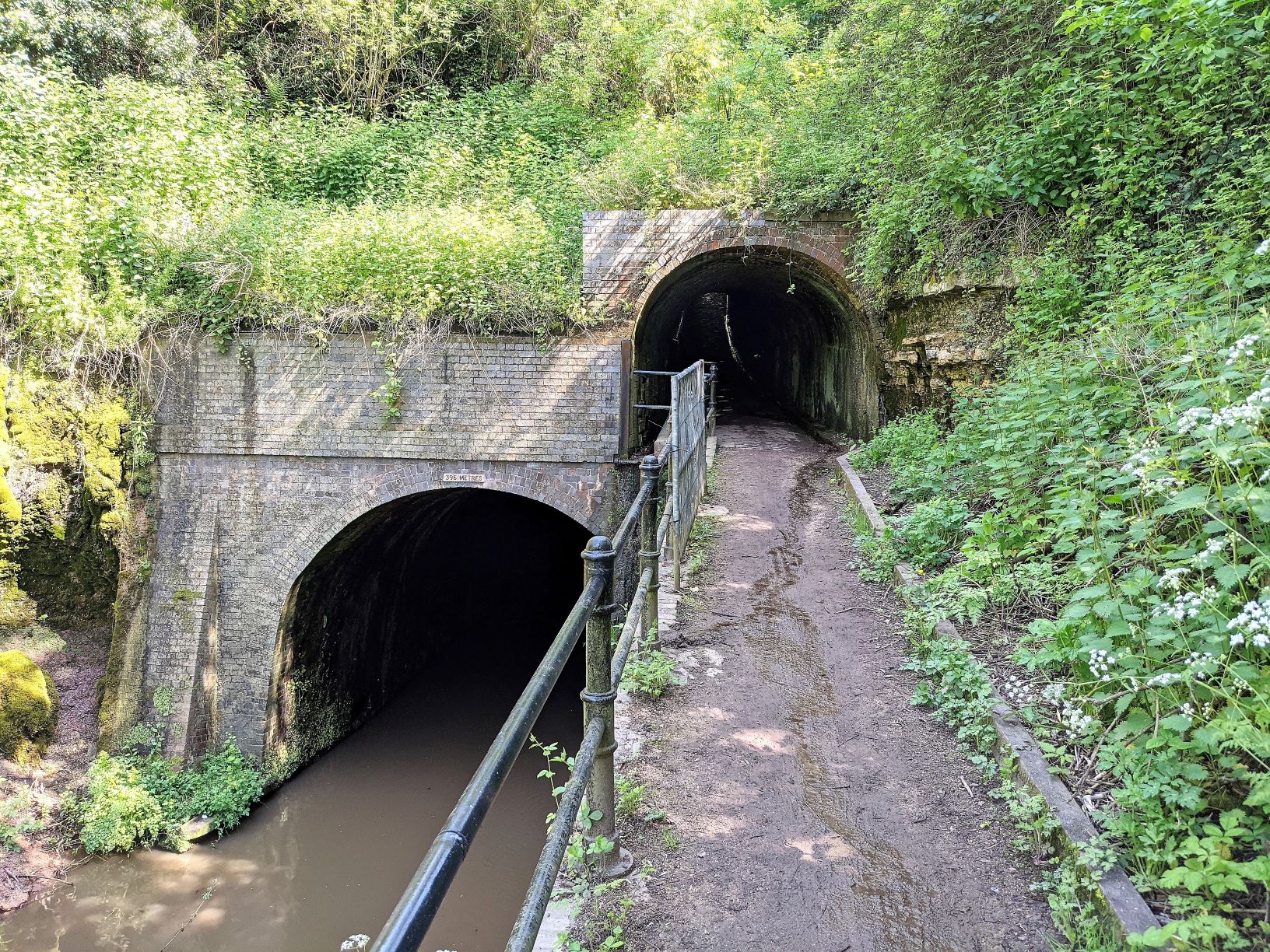 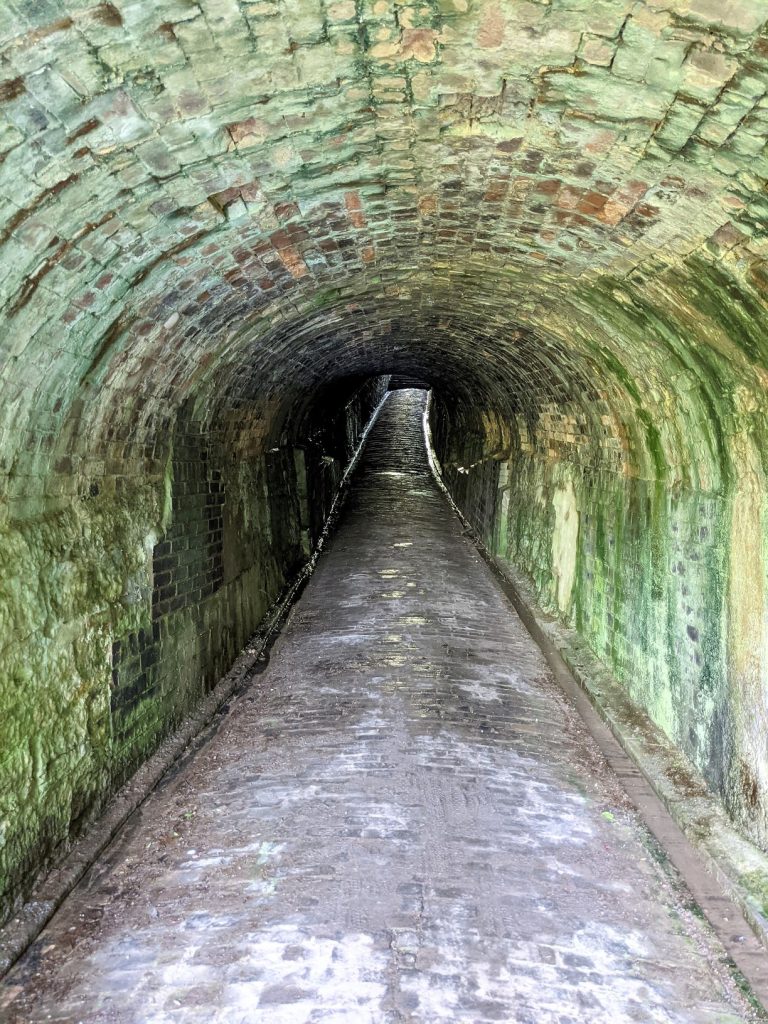 The next day, the first of "flaming June", produced some promising sunshine as we headed down Hatton Locks. We were joined at the top by a nice couple and their kids in the hire boat "Driftweed". They worked hard and were genuinely helpful but it still felt like a long day. 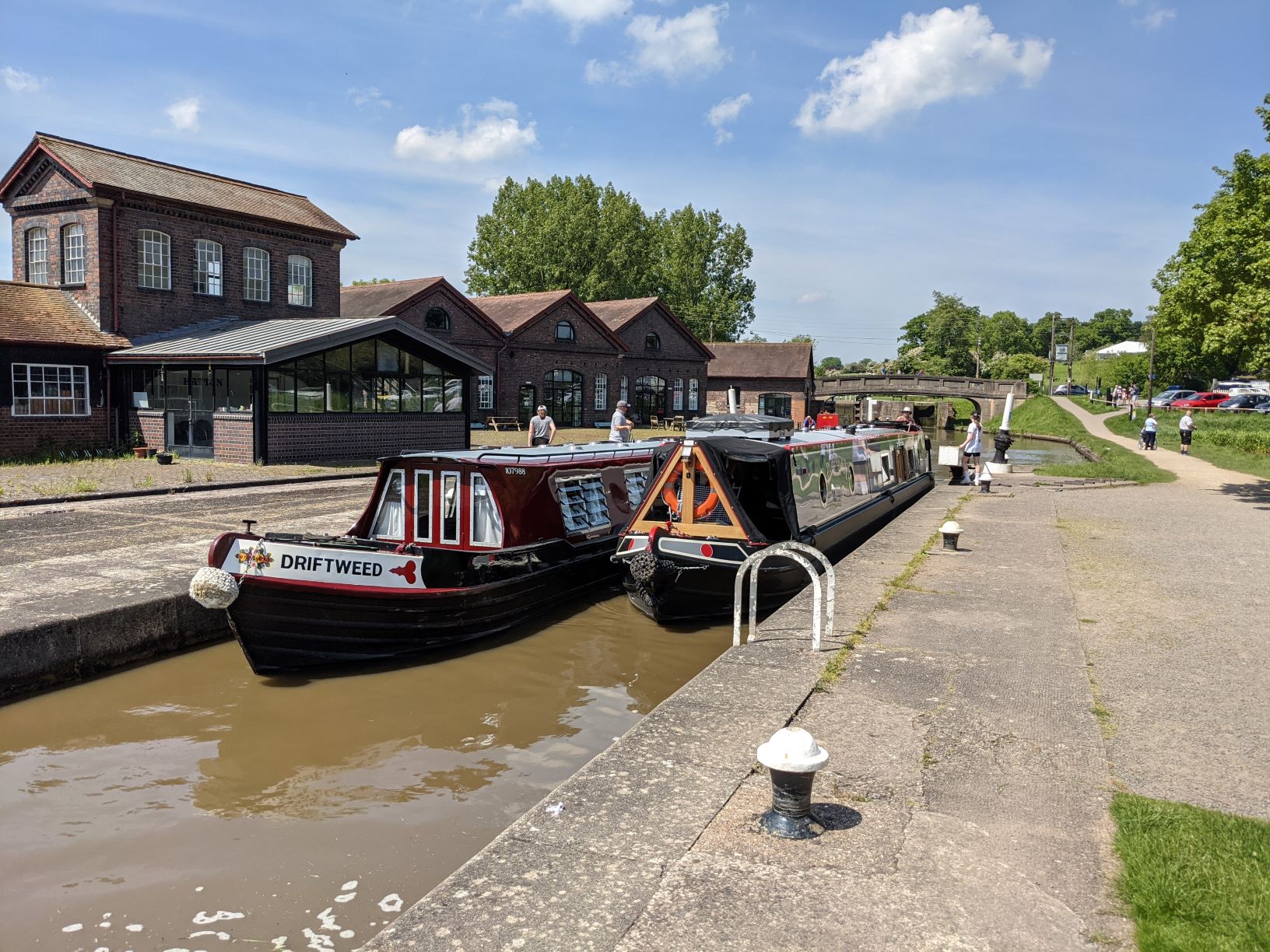 Drifting Down The Hatton Flight

We were in touch with Mike & Lesley Fielding, having had a lockdown breakout meal with them just before we left. They were heading towards Birmingham so we were able to meet up at the locks by the Cape of Good Hope pub. Actual ships passing in the night! We had a good night out, despite some shortcomings in the service but they were gone when we got up in the morning. The Fieldings do tend to crank it when they are out on tour and just hearing about their progress is exhausting.

We wandered on through Warwick, crossing the non-navigable end of the River Avon, some distance from the town where it still seems very rural 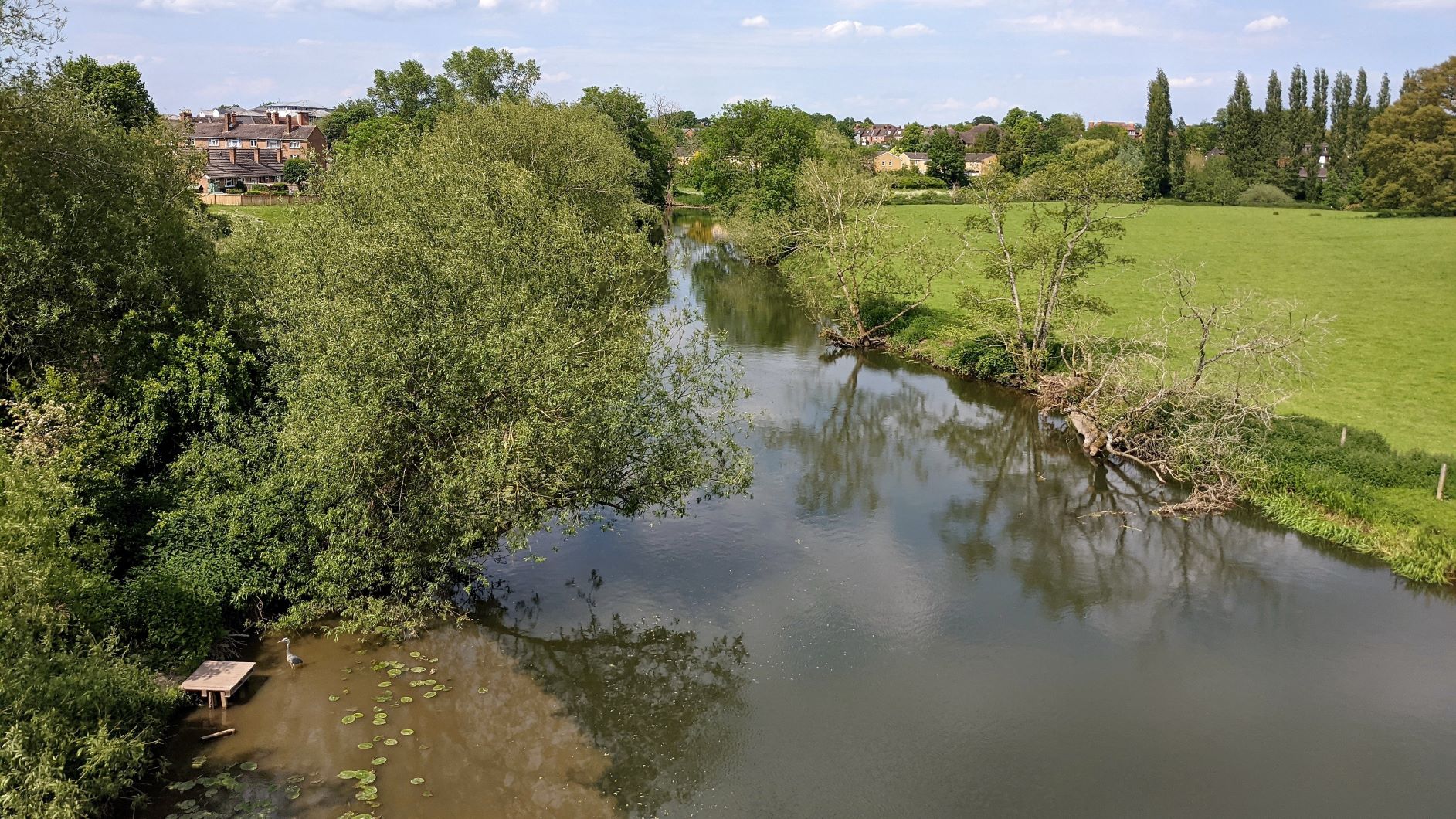 The River Avon At Warwick

and then through Leamington Spa, passing some graffiti that seems to be considered close enough to art to have avoided being tagged in it's turn. 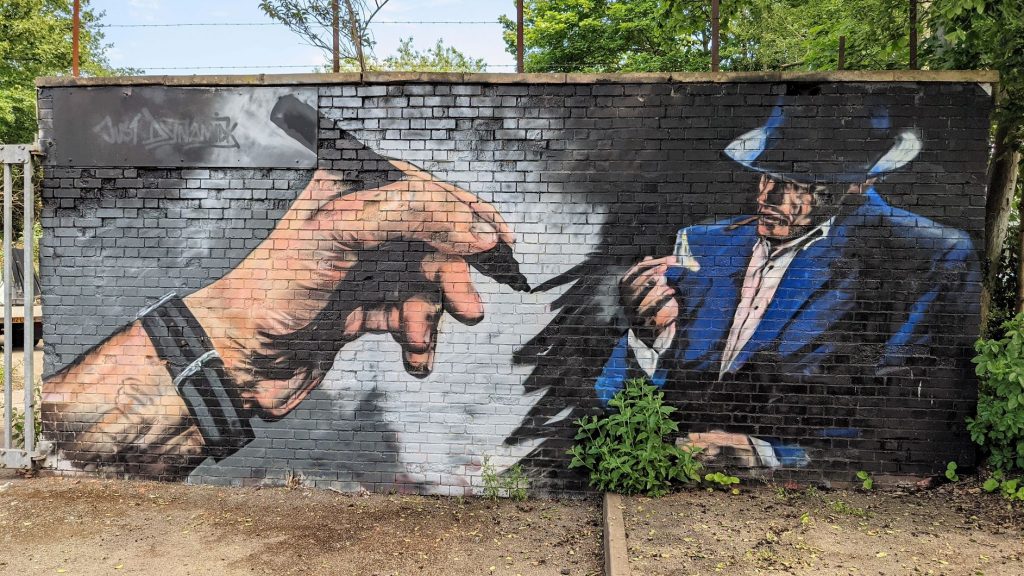 We moored up at Radford Semele, a favourite spot, for the night and were back in Long Itchington, thirty minutes drive from Briar Cottage, at the end of day five.

After a couple of days enjoying some home comforts we finally got going again on the Sunday and got as far as Flecknoe, another of our favourite moorings and found it so nice there that we stayed for three days. 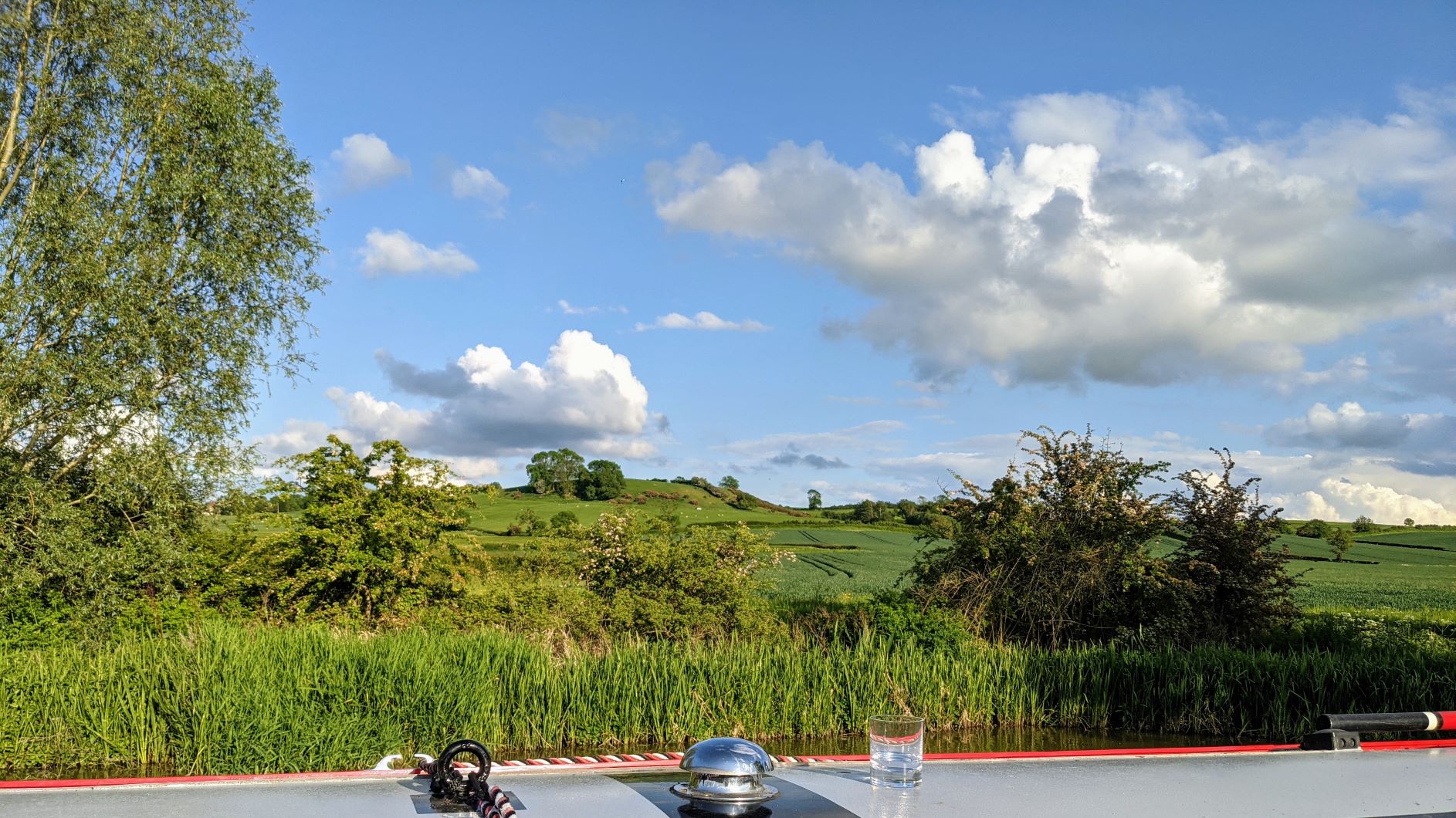 As well as a bit more exploration of the local area and the obligatory visit to The Old Olive Bush we had plenty to do on the boat, including a twelve hundred and fifty hour service on the engine, an hour's work for a skilled engineer but half a day minimum for me.

Up to this point we had still actually been within an hour or two's walking distance of home but on the twelfth day we moved on another three miles to Braunston. 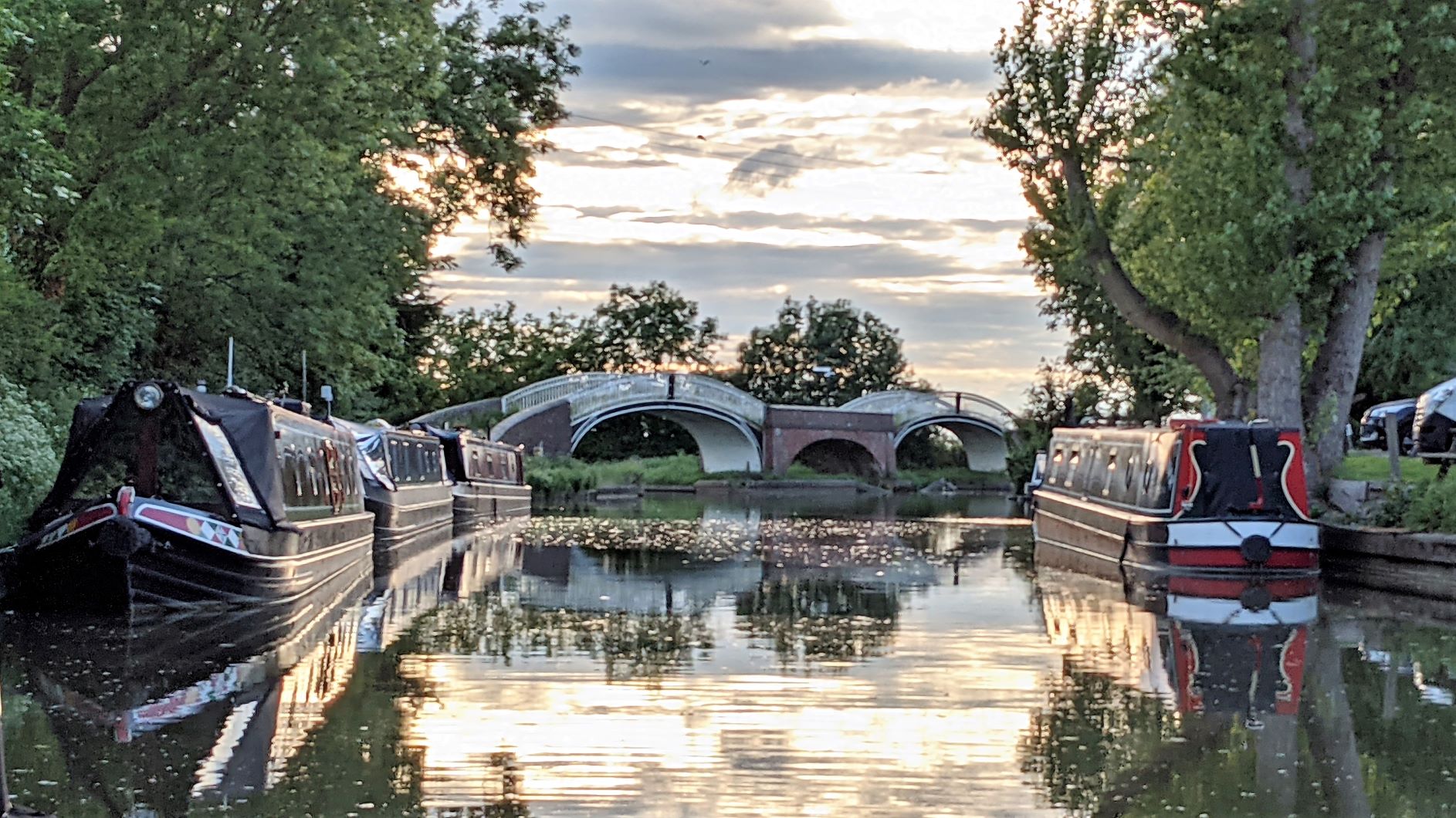 They have an excellent pie shop in the High Street and there was a nice walk out towards Barby where we found a garden centre tea room, open and ready to serve passing ramblers.

We moved again the next day, up through Braunston Locks and the long, kinked tunnel and stopped soon after. At this point you are very near Daventry Country Park so in the afternoon we went for a walk round there. On Saturday Sue went up to get the week's shopping from Tesco in Daventry and to search for curtain wire to make some mosquito nets for the portholes. In the afternoon we moved again, the third day in a row, to moor up just below the New Inn at Buckby Wharf, once a regular stop when driving back from Tesco to our previous boat, then moored in Crick Marina. 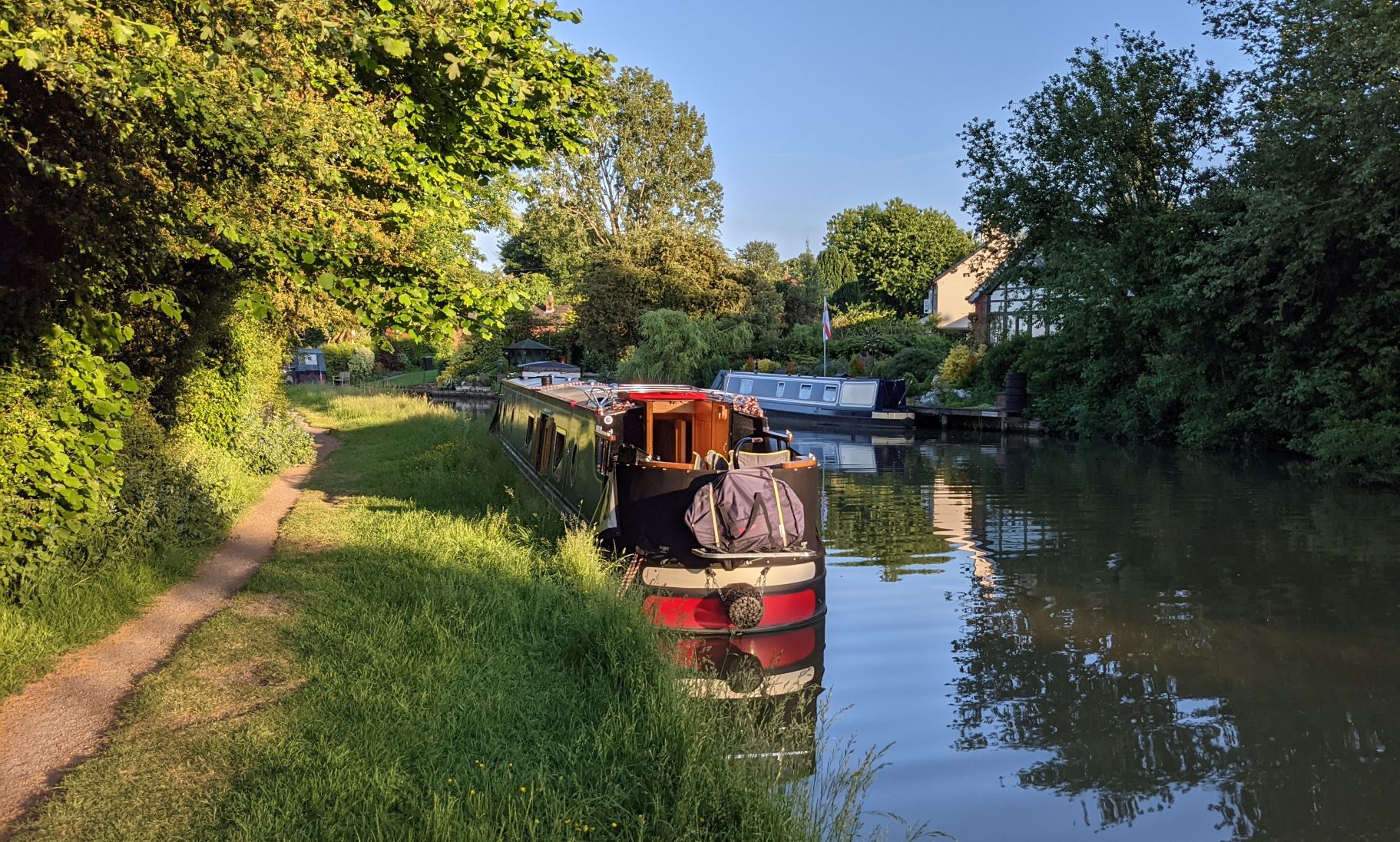 I took a walk up to Long Buckby. It is a little way away and we always thought of it as being a small, quiet place that had lent its name to the wharf just by being the closest identifiable settlement. It turned out to be quite a large, busy village with lots of restaurants, pubs and takeaway outlets for every cuisine, a large co-op store and even tattoo parlours and the like. The sprawl of development around it is extensive but there are older buildings scattered around. Some of these surprised me by seeming to be built of the honey coloured Cotswold stone, which seemed out of place in Northamptonshire. 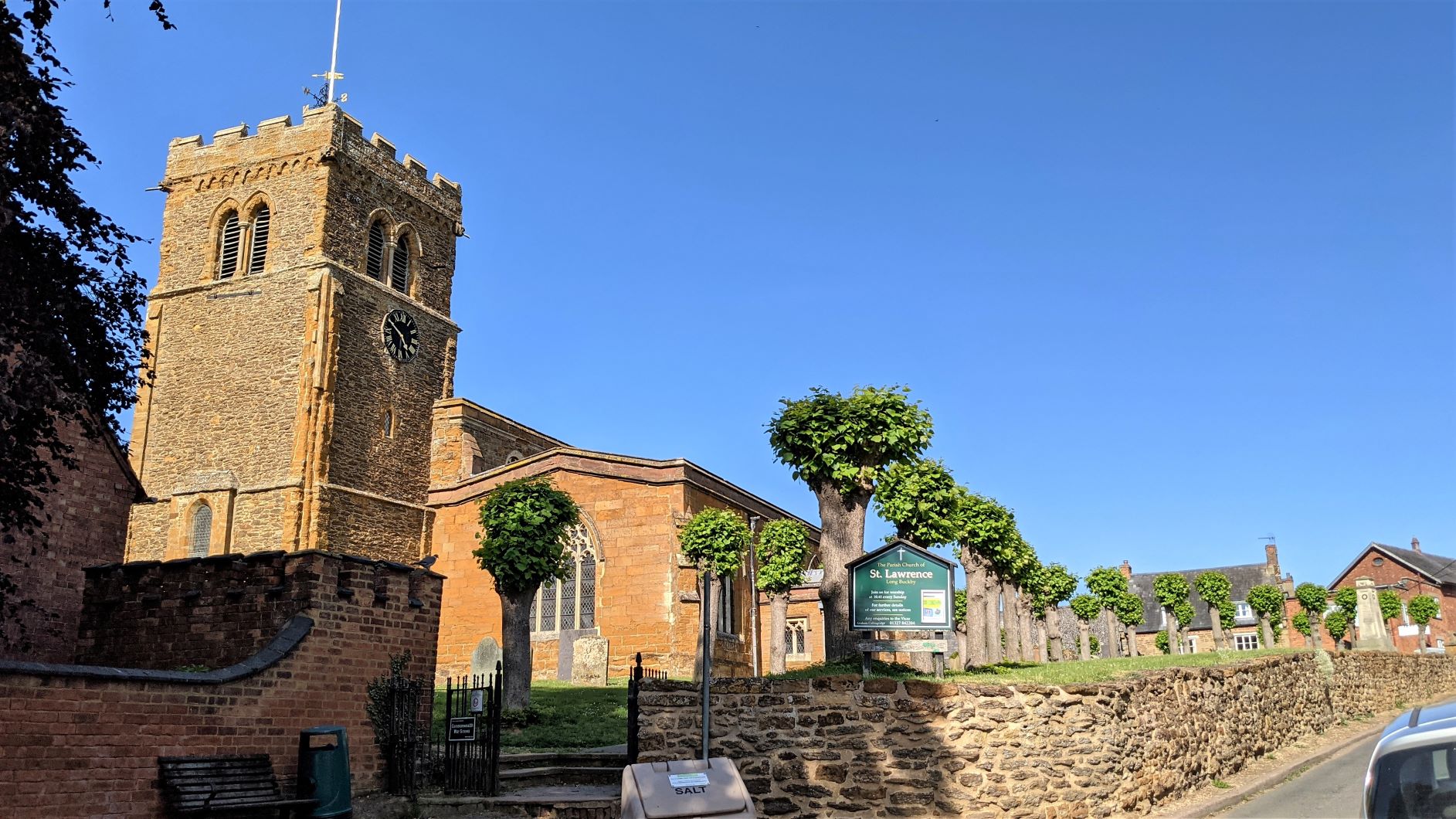 Long Buckby Church . . . two miles away as the crow flies

It still being hot and sunny we made the obligatory Saturday night pilgrimage to the New Inn before dinner. The next day we stayed put, Sue making highly successful mosquito nets, me cleaning the boat of the thick coat of guano acquired in Braunston and both of us fending off compliments on the boat from passers-by. It is amazing how many people comment on the boat as a whole and the paint job in particular. A return trip to the New Inn this evening didn't go so well. We were served at half past six but advised, then, that there was a private party booked and we would have to leave at seven.

With a few events on the horizon we at last had to sit down, review the dates and logistics and determine what we were actually going to do, rather than just having a vague notion of leaving the boat somewhere and going to the wedding.

The key dates for us were two-fold. Firstly they related to Jen's hen night on 3rd July. Sue was going and would need to go down by train from somewhere a couple of days before. Secondly we would both be expected to attend the wedding on 16th July, so we would definitely need a safe place to moor the boat for a week and be able to get a train back home to collect the car.

When we actually got down to it there were a few issues to consider. If we started down the River Nene before the wedding, one way or the other, we would be likely to end up rushing from one place to the next and miss the opportunity to enjoy the trip down the rivers and fens. The eventual conclusion was that we would do best to leave the boat at Northampton Marina to go and attend the wedding. If we did that we shouldn't really start up the Northampton Arm until 12th July. Even at the present rate we would be at the entrance by around Wednesday, nearly a month too early!

The solution to this problem was to set an itinerary to pass the Northampton Arm and keep going to Leighton Buzzard, where Sue could don her stilettos and kiss-me-quick hat to take the train for the hen night. I would stay on board for a few days and when she returned we would return to Gayton and head up the locks to the mooring now booked at Northampton Marina. On the way, we would set a relaxed pace and stay two nights or more at most places.

We are pretty familiar with this stretch of the Grand Union but one of the things we wanted to do was to explore some of the places that weren't right on the canal; places we had absolutely no reason to visit other than to see what was there. This approach should give us plenty of time to do just that.