Traditionally wash day is Monday. Starting this hugely onerous and labour intensive task on a Monday gave the best chance of having it washed, dried, aired and folded in time for Sunday, the day of clean clothes. It seems that having a cold supper on a Monday, based on leftovers from the Sunday roast, linked in to this, as there was no time for elaborate food preparation and cooking alongside the weekly wash.

For us, this week, wash day was Friday. Just as tedious, as it turned out, if not as labour intensive as expected. A text first thing promised the engineer's attendance between 11:20 and 14:20. A text back to confirm he had the right postcode eventually elicited a phone call from him a couple of hours later, just as we finished taking the heavy privacy door off its hinges. No, he had been to Coventry first thing and was heading over to our house, where he would find neither ourselves nor the washing machine. Before changing his destination he asked for more information about the fault. A thirty second description allowed him to diagnose that a new PCB would be required, a part he did not have and would have to order in. He didn't know how long it would take to arrive but in two weeks' time he would be on holiday for three weeks. He was confident it would not turn up in time for him to then arrange another appointment before that time. It seems he was the only Beko service engineer in the Midlands. With that, he hung up to go and arrange the part with the office.

An hour later he rang back again to let us know that the office had now told him that our machine would not be covered under the service agreement we had been sold as it was on a boat. This was accompanied by some mumbo jumbo about fluctuating power supplies that seemed rooted in the limitations of primitive 'modified sine wave' inverters installed on boats in ancient history. Relevant or not this hidden condition was clearly not to be overturned without a battle royal, probably through the medium of 'Watchdog' and certainly not in any immediate timescale. Our turn to hang up and regroup.

The first action, as it was already thirteen days since we had been mis-sold the service agreement, was to get on to Domestic & General, cancel that agreement and instruct our bank to cancel the Direct Debit. Beko wouldn't fix their own appliance so one option would be to engage a local repair company to do it. They would, of course, require a call-out fee with no guarantee of outcome. We spoke to a couple and one really helpful person explained that, while they could purchase a suitable PCB at a cost of approaching a hundred pounds, they do not come pre-programmed. The Beko engineer would have the necessary equipment etc. to programme it for the machine it was fitted in. In any case, that would address the immediate point of failure but possibly not any underlying cause. Further expense would be involved in trying to firstly identify and then rectify that issue or else the PCB might just blow again. Clearly this was not a good bet. The remaining option, then, was to scrap the machine and buy a new one to replace it.

Having now been at this for about three hours we embarked on the process of deciding what to replace it with. Most machines are a broadly standard size. In a kitchen they are pretty interchangeable. On the boat, however, millimetres matter, so the specifications of every candidate must be subjected to very close examination. Post-COVID we found that a lot of possible models were simply unavailable anyway. We considered top loaders, front loaders, small washtub versions for caravans and mobile homes and consulted the narrowboat forums for recommendations and experiences. Key features for selecting the defunct machine had been a load of 8 kg and a spin speed of 1600 rpm. However, during our several months aboard last year, we had found that we mainly washed quite small loads, quite often. Any bedlinen or towels, which would make larger loads far less frequently, would be hanging around drying for ages so we would tend to take those to a full scale laundrette in any case. Taking that into account we finally opted for a small Zanussi machine with a load of only 3 kg but a relatively fast spin speed of 1400 rpm. We could make something positive from the situation by virtue of the much smaller size of this machine. It would be simple to manoeuvre in and out of the space available, avoid the need to dismantle the boat if we ever needed to work on it and leave extra space around it that is always precious. Somehow smaller size always means a larger price tag but it was readily available for delivery from a range of suppliers. One other positive was that the original machine had been included in the overall price of the boat, so we could fool ourselves that we had not specifically paid for that one in the first place.

Several more hours having been consumed in market research and the order process, we replaced the door we hadn't needed to take off and repaired to the garden of The Greyhound for a well-earned drink.

Putting the previous day's events behind us we set off on a hot, sunny Saturday morning round the junction and into the North Oxford canal. A lovely day for a cruise for a few hours and we moored up back at Brinklow about half past one but not before Sue had decided to take a dip. Jumping onto the bank as we came in to moor she found that it wasn't very solid. The soft, damp earth just gave under her weight and slid into the canal. Sue's foot went with it, followed by both legs until she was waist deep but still clinging fiercely to the centre line as the boat continued to glide forward. Having been persuaded to let go and just stand up she was able to find her feet but a sloping rocky side under the surface meant she couldn't get out until I had managed to get ashore and help pull her from above. Good job it was such a hot day, the water was warm and after a swift change the wet clothes dried out quite quickly.

As we were all now having a heat wave there was quite a lot of lolling about and panting these afternoons. Boats that would normally be seeking a spot in the sun to boost their solar power were now fighting for a berth in the shade and intrepid travellers who would normally be cruising until dusk were stopping early and resting up, so by three o'clock it seemed the banks were a lot busier than the water.

Sunday morning was greyer and cooler but before midday the sun burned through and it was then just as hot. We put in a few more hours before lunch, passing through Newbold and Rugby to arrive at Clifton.

Away to the south east of Rugby, in what was otherwise open countryside, lies Rugby Radio Station. This was not a local radio station but a large radio transmission facility, opened in 1926, that by the 1950's was the largest radio transmitting station in the world. It was closed fifteen years ago and this is where they are now building a whole new town. Something in the region of six thousand two hundred new houses will be constructed under the made-up name, borrowed from America, of "Houlton". All of these new people have nowhere to go but Rugby so, of course, a major, dual carriageway, link road has had to be built, including a posh new bridge to carry it over the canal and railway. The site of this bridge has been a nasty, noisy, messy hotbed of civil engineering for a couple of years. Now, with the road finished and the site cleared, the area is altogether more peaceful, apart from the noise of the traffic! 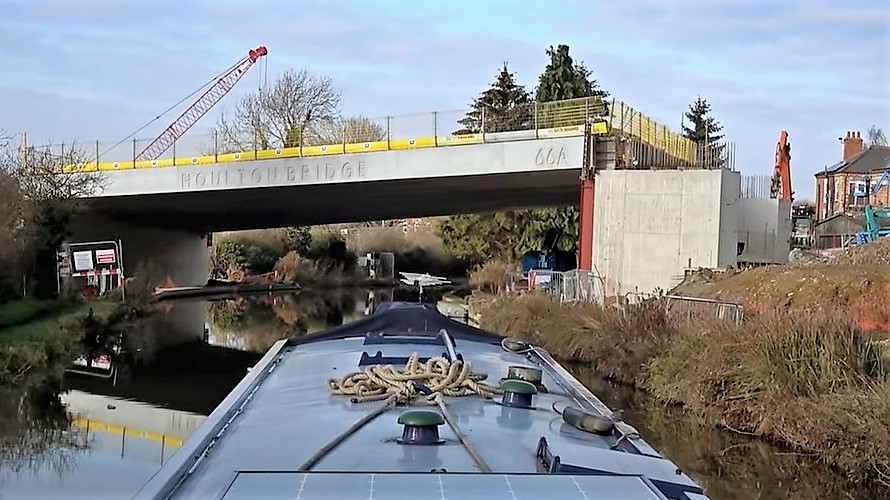 Finding a quiet spot a little way past the new bridge, with a bit of shade from the hedge, we settled down for another hot afternoon. The towpath was a little bit busy on a sunny, Sunday afternoon but the main disturbance was the ribald banter and occasional shout of 'Fore!' from the golf course that sits just the other side of a strongly maintained hedge and fence all the way along here. While the greens and fairways are sealed off from the canal their expanse provides a great buffer between moored boats and the teeming town of Rugby, which otherwise is close enough to be a worry.

Further Than You Think

Hillmorton with its three pairs of locks was just around the corner and the plan for another hot day, with thunderstorms promised in the offing, was to get through there, down to Braunston and round the junction to moor down at Flecknoe again. It somehow feels as if, having passed Hillmorton, you should be arriving in Braunston quite soon after. In fact, it is a good six miles further on and took us several hours, including a lunch stop and the water point, to get there. You can see Braunston Church spire from miles away so the anticipation of it coming into sight around every bend makes the trip seem even longer. From the junction to Flecknoe is only about an hour but by the time we got there it was four o'clock, very hot and we had been on the go, one way or another for six and a half hours. Far too long a stint for us! However, we managed to bag Neil Payne's favourite mooring spot between bridges 101 and 102, a section of Armco with a great view and just long enough for one boat before the bend. 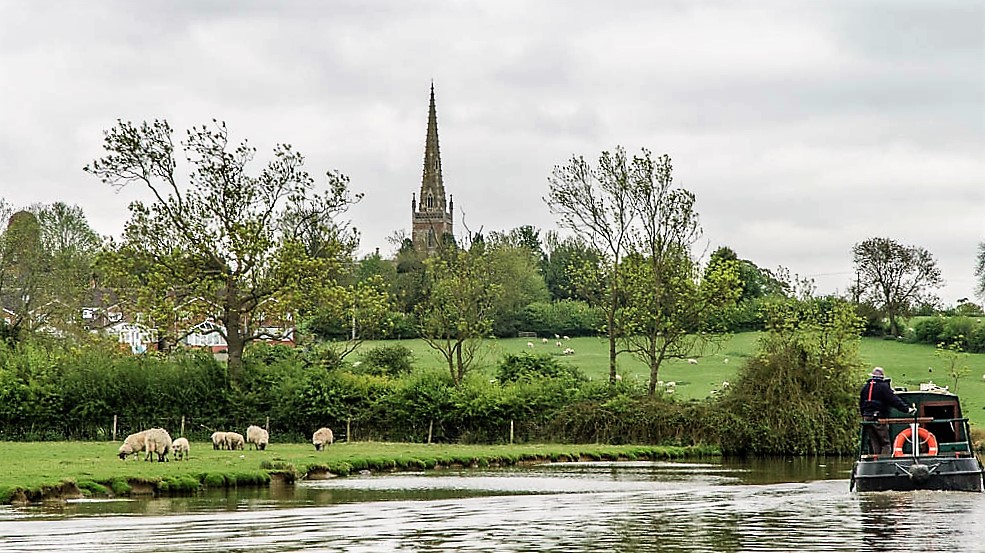 It was still well over thirty degrees so we walked up to the Old Olive Bush and sat in the shade of their garden listening to thunder that seemed to be all around but never actually generated any rain where we were. When we returned to the boat it was still hot and muggy so we sat outside eating dinner well into the dusk, which is when we spotted our first wild otter swimming past and heading for the bank further down. There have been various suggestions that this might have been a mink, a dolphin or a disoriented SCUBA diver but we are definitely sticking with otter.

After a muggy night the landscape next morning was shrouded in a thick mist but the inside temperature was still well over twenty degrees and the sun burned through before nine o'clock for another hot and sunny day. As we set off on the final short hop back to Calcutt Marina we passed several fields packed with sunflowers, a scene we would normally associate with the south of France. Perhaps they always grow sunflowers as a crop in Flecknoe but we don't remember seeing them before and these were in full bloom.

We were moored up, after a remarkably smooth passage down the locks and into the marina, easily by noon. The point of coming back here was to clear the boat, as far as possible, of everything breakable, valuable or perishable before it was taken away.  We managed to clear one car load before we went home for lunch. Coming back up in the afternoon we managed to pack the foodstuffs and our clothes but it was far too hot inside to do any more and we left the rest for a cooler day. We still needed to get the boat down to the crane at Whilton Marina, at least a couple of days away, so a minimum of stuff needed to stay on board anyway.