With a new boat on the horizon and a need to decide where to put her in the water, as well as where to keep her longer term, we also need to make plans for the future of our faithful “South Downs”. We bought her from Whilton Marina two years ago and they are one place everyone goes to when looking for a boat. They also provide the option to buy the boat for cash as well as to broker it for a commission. You don’t really need to spend several days taking the boat to them to get it valued, they will come to you by car in about half an hour. However, for us it was a good excuse to take the boat out after more than a month in “dry dock”.

Originally we planned to set off on Sunday but shelved that idea as there was still a fair bit of ice around. Instead, we went up to Aintree earlier in the week than we had anticipated so we could go out on Thursday when the weather was expected to have become milder.

It was certainly milder but accompanied by very high winds with gusts of 70 mph and more. Reluctant to abandon our plans a second time we went for it anyway. That may have been a mistake. Perhaps partly as an effect of the wind it had already proved to be a clumsy day, with everything I touched ending up “butter side down”. That trend continued throughout. We even managed to lose the boat hook overboard, not once but twice. At least it floats so we were able to retrieve it. Of course what we would usually use to retrieve something lost overboard would be the boat hook, so that made things a bit more awkward.

Mistake or not, we made it through the narrow gap from the inner basin to the outer marina with some aplomb and shouldered our way out of the entrance into the main cut quite successfully – if you call being pinned to the opposite bank by the wind and facing in the wrong direction successful. In the end, having failed to make any progress in turning around there, we were obliged to travel directly away from our destination until we could find a more sheltered spot with sufficient width to turn round.

Arriving back where we had started from but twenty minutes later, we could now tackle the first three locks. With no-one else being foolish enough to unpin in these conditions we were able to lurk in the lee of each lock until the next was open, which made things a bit easier, at least until we came out of the top lock. We were now exposed to the wind whipping across the open reservoirs on our right and had to reverse on to the water point across the canal and alongside the lock. Another painful struggle with the mooring lines to pull the flat side of the boat directly against the wind followed. At last we could turn our attention to the water point, only to find that it was leaking badly from anywhere except the business end. Ultimately, we weren’t that short of water so we decided to leave it and find another water point in a  better state of repair further on.

So far, even we would have to wonder why we were doing this. It had been hard work all morning, the wind made it a bit unpleasant and the occasional rain squall made it worse. At this point, however, we were able to settle on a more or less straight course, the wind tore some holes in the clouds and let the sunshine through and all of a sudden it felt a whole lot better. The sun got stronger as the afternoon went on and the winds had eased considerably by the time we got to Braunston. 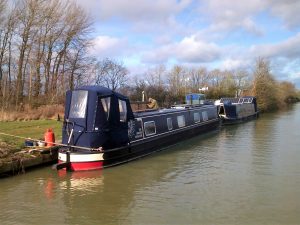 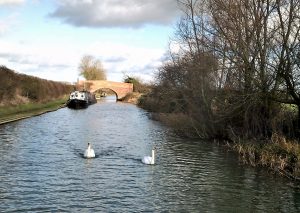 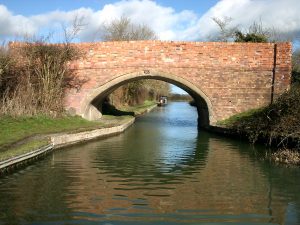 By the time we had stopped again for water at Braunston Stop House and passed through the first three of six locks it was already four o’clock and by a remarkable accident we found ourselves with space to moor in the pound just above the Admiral Nelson. Originally, we had meant to get as far as the New Inn at Norton Junction but that would mean another couple of hours and arriving in the dark. It was not a difficult decision to put in some pins and moor up here for the night. The decision was made all the simpler as we had learned that the New Inn does not allow dogs inside whereas the Admiral Nelson boasts that it is ‘dog-friendly’. The latter certainly proved to be the case and we found it a very pleasant and welcoming pub.

We didn’t get going quite as early as we had planned on Friday morning. The evening before, I had wandered up and found that one top gate had been left open on each of the three top locks. There aren’t many possible explanations for this other than a boater having gone up ahead of us being too idle or ignorant to finish the job and close the gates behind them. I had closed each gate and hoped that the flight would regulate itself overnight. As we were about to set out and I went to set the next lock I met a single hander, on his way down, in the process of bringing water down from the top lock to fill a virtually empty pound between locks 4 and 5. While that added an extra delay it also gave “Priceless” a chance to catch up with us on their way up. With a crew of four middle aged men on board the extra manpower, however inexperienced, meant that the process of filling the pound went faster and once we did get moving we could get through quicker than we would have done on our own.

At the point where we asked him, even the apparently experienced master of “Priceless” didn’t appear to have settled on a plan but he asked about the route north and having told them a bit about the Leicester Line, this end of which we now know quite well, they decided to take that turn at Norton Junction. Bit of an own goal really; it meant the extra help didn’t follow us down the next flight of seven locks from Buckby to Whilton. With the wind rising again and occasional drizzle it was quite hard work and the arrival of much heavier rain for the three locks from the end made us regret lying in. An earlier start would most likely have seen us tied up and hunkered down before the real wind and rain started.

At the end of the flight it is only a few hundred yards to the entrance to Whilton Marina. As we were told even stronger winds would be setting in that night and through Saturday morning and as we expected to be heading back up to retrace our steps first thing the next day, we thought it best to turn the boat to face the right direction now. Despite approaching it with a degree of trepidation we executed a rather graceful turn, with a short lunge and retreat in the marina entrance to bring us round. Rather less graceful was the heaving and grunting required to haul the boat, flat side on, into the windward bank of the canal and get her tied up there.

As planned, the guy from Whilton Marina who does all their valuations came across and gave us a figure for selling the boat through them as a broker and another for them to buy it as a cash sale. The former was pretty consistent with others we had received and the latter not quite as disappointing as we had expected. He then proceeded to put a real fly in the ointment by pointing out that, if we were going to sell it through them, we could save ourselves the trip back and leave the boat there right away. It would still be ours and not up for sale until we were ready but they would moor it free of charge until the new boat was ready and also moor that one free for a week or so while we completed the transfer of equipment from one to the other. They weren’t concerned that the date at which the boat could go on sale might shift at the whim of our boat builder and would even run us back to our car so we could fetch it back to Whilton and pack our bags to go home.

Cue yet another sleepless night, deciding what to do. We had expected to travel back over Saturday and Sunday and make a decision after this trip. If we did decide to go with Whilton, however, we would have to repeat the exercise again once we had received and transferred to the new boat. At the same time the idea of just walking off and leaving “South Downs” in their care was quite an emotional one. We have formed quite an attachment to our very own boat, far more than to any bricks and mortar we have owned and more like a faithful steed. Abandoning her was going to have to come eventually, we just weren’t mentally prepared for that decision today.

In the end, of course, common sense prevailed. We decided that Whilton probably were the best people to broker the boat with the highest chance of a quick sale. There was enough difference in the net outcome for us to believe that we would be better off taking a chance on brokerage than a cash sale. If that was the case, there really was no point in flogging the sixteen locks back to Calcutt only to have to do the same journey again in a few weeks time. We duly informed them, I got a lift to the car and brought it back and we packed up our things and prepared to move “South Downs” to a berth in the marina. While we waited for the wind to drop the dog needed a walk so I let her take me up the towpath past the seven locks we had covered yesterday in two and a half hours. Sure enough, on foot and not working the locks, we were back at the New Inn in about forty minutes. We called our driver, Sue, to come and collect us and we settled outside by the top lock with a drink in hand and just enough sunshine to avoid being frozen.

Finally, with the wind eased a little, we attempted the move into the basin. It hadn’t eased enough, apparently. It was a complete mess, requiring three attempts, a lot of sideways crabbing and a handful of casual ricochets. Nonetheless we made it round, moored her up and there she now lies, waiting for us to come back in the coming days, remove what we aren’t selling and to dress and groom her for sale. The final pages of an exciting chapter!