“Here am I, sitting in a tin can . . .” is the lyric you just can’t shake in the current climate, when you are moored up and waiting for evening to cool things down. It has gone on long enough to justifiably be called a heatwave and inside a steel box it can get quite uncomfortable. Obviously, we are outside a lot of the time but sometimes you need to do things or sit on board. From now on I think we will be on Mediterranean Rules:

1. Do as much as you can before the heat rises
2. Sit around in the shade and contemplate the world over a cold drink for a few hours
3. Pick up where you left off in the evening if you can summon the energy

This week we have mostly been heading down the Grand Union towards “that there London”. A steady progression through many locks, 49 all told, the odd Lift Bridge and a grand total of about 24 miles.

Hardly unexpected, but the further south we get the more boats we see moored up with very few that seem to actually move anywhere. Some are new and shiny, others older and lovingly maintained. They come in all shapes and sizes and many different states. More than half of the boats we pass, however, seem completely unloved. Whether or not they are on an official long term mooring they have messy encampments growing up around them on the towpath, often rows of them together like a city alleyway and the condition of the boats mostly evokes words like: squalor, filth, decay, despair, scrapheap etc. We know that even some of these may belie an interior like a tiny, shining palace but we suspect those are in the minority.

Along with the numbers moored there is a steady change in behaviours. More people avoid eye contact and decline to return a greeting. It is more common to see clearly long-term canal dwellers dropping the lock paddles with a rattle and thud that is sure to hasten the breakdown of the mechanism or drive out of a lock just leaving the gates wide open. There is an established principle of slowing to tick-over when passing moored craft. Maintaining even the normal pace for canal cruising sets up a wave that sends the boats and their occupants rocking and drags at their moorings. This is the subject of plenty of heated exchanges in the midlands with the common cries from those moored of “Are you in a race?”, “You’ve lost your water skier” etc. It is often said that the main offenders are inexperienced boat hires but it doesn’t really seem to be the case and it goes without saying that this courtesy is honoured much more in the breach than in the observance as we approach the big smoke. Curiously, while the banks and boats get progressively scummier and more congested, we noticed the water has begun to get much cleaner and clearer as we cross a boundary into the London Boroughs and the canal becomes much wider here.

As far as progress goes, it varies. On Thursday we did the planned seven locks to Tring Summit by lunchtime and decided to push on to Berkhamsted. A mistake really, it was another seven locks and with a lot of them being left deliberately empty to manage leakage the workload per lock increases. It made for a long, hot afternoon. By contrast, on Friday we waited until late afternoon to move just one mile and three locks down. In the heat we lingered in “Berko”, looked around the town and visited the castle. A typical English Heritage ruin but unusual in how clearly you can see and understand the whole defensive layout and the motte & baily design. Worth a visit.

Saturday took us through another fourteen locks down to Hemel Hempstead, with various stops to visit the Post Office in Boxmoor and Sainsbury’s at Apsley. Another hard, hot, sweaty day; when will we learn? Having said that, it got us out the other side of Hemel, which didn’t seem to have a huge amount to recommend it as seen from the water.

On Sunday morning about 06:00 we woke up to the sound of shouting voices and footballs being kicked around. On further investigation it turned out that, while we slept, a huge Boot Fair had set itself up just the other side of the hedge where we had moored. Apparently it didn’t open until 07:00 so the queue of cars waiting in the road outside was showing up blood red on Google maps as we tried to find out what was going on.

Another nine locks that day was more than enough and took us to Cassiobury Park, which seems to carve a small slice from the line of the canal into Watford. Incredibly busy on such a hot, sunny Sunday with schools just broken up but it is a lovely park with a whole range of different areas. There is lots of grass around a modern water splash and café and a miniature railway. It is crossed by lots of cycle trails and a large nature reserve. This has all sorts of streams, brooks and shallows, some areas of woodland and some areas of wetland. We even saw a deer just standing and grazing on the track ahead, despite all the noise and numbers of people around.

At this point we were heading for Harefield Marina where we had arranged to leave the boat so that we can return to Kenley for a couple of events, including birthdays for our son, Nick and my mother. As we were only nine locks away from there now we planned to do five of them on Monday. In the end we stopped at lunchtime just before the last one, Stocker’s Lock. Here there was a nice clear visitor mooring, in the shade, right beside a wide area of lakes and nature reserve that separates the canal from the urban mass of Rickmansworth to the north.

It turned out to be a lot busier than it looked. The thump of some sort of music started up on a boat moored at least 200 yards away. Lots of people were walking and cycling around well into the evening, a lot of them talking loudly in a strange language. Around the lakes are signs explaining that fishing permits are required. They start with a union flag and the text in English. This is then repeated five times with different flags and languages, none of which I recognised. I guess there is a strong Eastern European influence in Hertfordshire.

Apart from the general bustle of passers-by and, we kept hearing an odd beeping noise. It was like a large vehicle reversing in the distance and just went on and on, stopping occasionally but always starting up again a few minutes later. As afternoon began to turn into evening there was a new noise of heavy engines, then a drone buzzing loudly overhead. Not a Jason Moore type big boy’s toy drone but a huge industrial, load carrying model.

Eventually, we could see the boom of a large extending crane reaching up into the sky, high above the lock and the buildings beyond, with a massive, movie-style, spotlight suspended from its tip. This was the source of all the beeping and engine noise and we remembered there was a notice from CRT that filming would be taking place in Denham the next day. We concluded that we must have managed to moor 300 yards from the site of a film crew setting up for the next day and perhaps taking establishing shots etc. It carried on well into the evening and it seemed they might be running out of time because, as the sun started to set, things seemed to get more frantic with a lot of angry shouting and debate floating clearly across the water. In the end it only really stopped around midnight.

On Tuesday we finished the last five locks to our mooring site by about 11:00, with the help of a couple who wanted to share the locks but were keen to start earlier than we usually do. The word ‘marina’ conjures up a vision of expensive yachts and motor launches moored against a herring-bone of pontoons, rocking gently in the clear, blue waters of a posh harbour like St Tropez or perhaps Chichester or Poole. One imagines a team of smartly dressed attendants providing lavish services with the latest, up to date equipment. 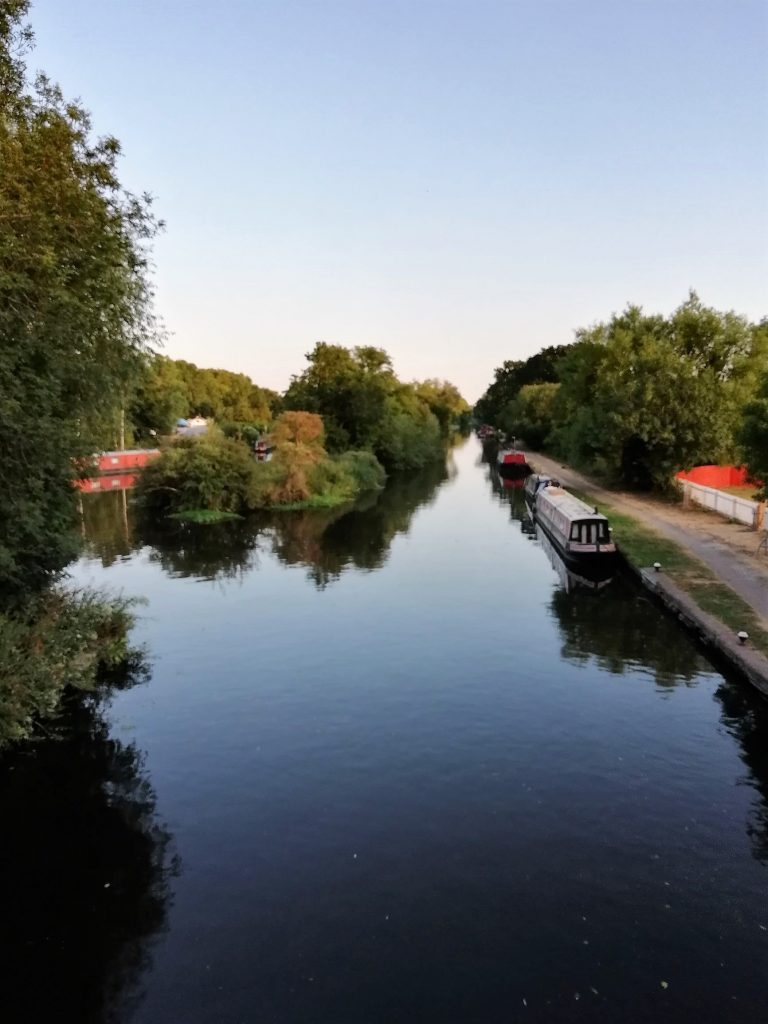 Harefield Marina demonstrates the gritty reality. A marina is a car park for boats. Car parks have a very broad spectrum from the well-maintained, clean, orderly and secure multi storey to just a piece of waste ground with a gate. Marinas have a similar degree of variation and if Crick Marina, where we had moored South Downs for the last year, represents the upper end of this scale then Harefield Marina lies somewhere near the bottom. We found ourselves nose on to a swampy weed covered bank between two other boats with no pontoon or bank to tie up to on either side. There was an electric socket and a tap, together, a few yards away. Facilities are basic, at best, with a very run-down feel and a strong DIY approach. Crucially, no showers and no laundry or clothes dryers for the big wash Sue had hoped to do before we headed south.

Fortunately, with the weather as it is and shore electricity to drive our little washing machine, we could fall back on that. As for the rest of the time there we won’t be staying on the boat anyway it is not much of an issue. We do probably need to be a bit more selective in the future.

Wednesday offered our third encounter with public transport. No trains cancelled, no connections missed and the whole trip from marina to Jen’s flat completed in about three hours, probably as quick as we would have done it by car via the M25. By the end of the day we had also exchanged contracts on our new house in Long Itchington, so another big step along the road.