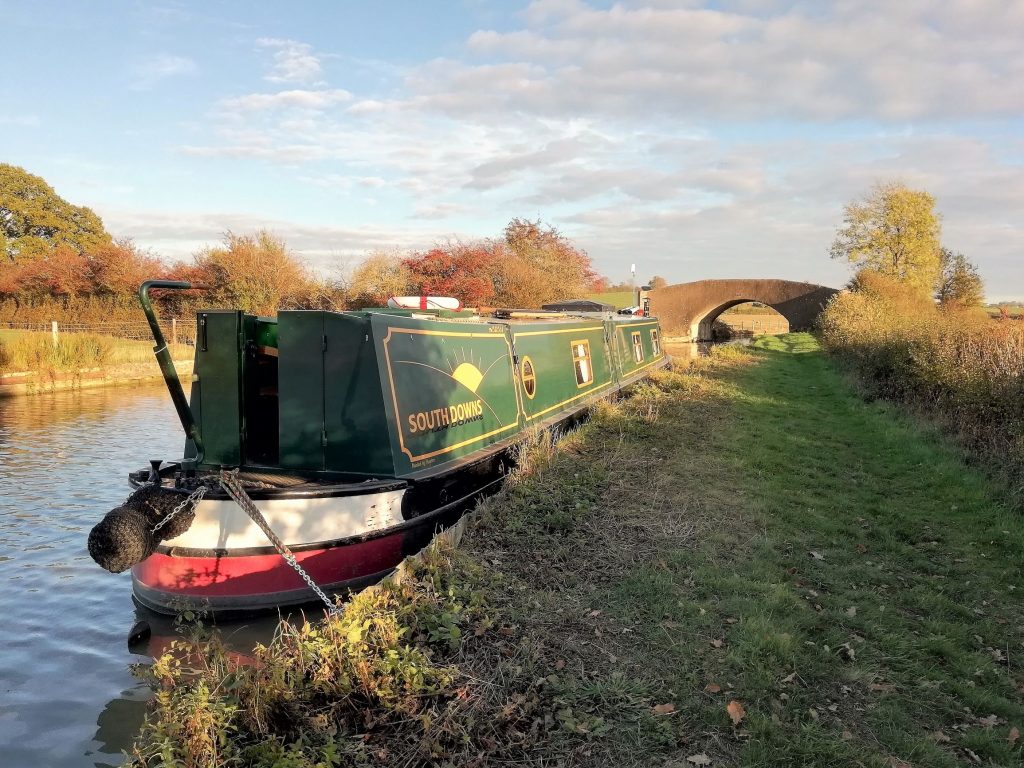 We had thought the best of the weather was behind us but we may have called time too early. Although the days get steadily shorter, overnight temperatures are lower and the leaves are falling in earnest there has also been a resurgence of sunshine for the second half of October. Completion day dawned bright and sunny and we had an easy time to finish loading the car to the gunwales and set off for our new home.

Calls en route confirmed that the completion had been accomplished well before noon and we arrived before lunchtime while the developers were still completing what they called a ‘sparkle clean’ around the house. A very brief tour of the premises and a short handover process left us holding the keys. We didn’t have long to get a set of keys to the carpet fitters in nearby Southam, grab some lunch at the Gateway Café next door and get back in order to lock the car in the garage in time for the taxi to pick us up and whisk us back to the boat in Rugby.

We were there by about three thirty and the boat seemed unharmed, apart from a carpet of leaves right across every horizontal surface. It was still a lovely autumn afternoon and fifteen minutes exercise with a broom in the sunshine was no hardship. We were in a bit of a hurry, though, as we still had to top up with water, turn the boat round, moor up again and get down to Tesco for the supplies we would need for the journey back, everything having been run down before we left, as the fridge was going to be switched off while we were away. Back on board by about six thirty, with the shopping squared away, we finally had the opportunity to sit back with a cup of tea and contemplate our return to a life of bricks and mortar. We had a house again – hooray! But did we really need it?

The weekend weather was golden. Misty mornings and early cloud cover cleared away each day, leaving sunshine and blue skies to lift the air temperature for genuinely warm afternoons. The sun weakened from about four o’clock each day but the nights that followed offered clear skies, brilliant moonlight and thousands of stars. We noticed that the canal was much busier than we were used to and began to realise that it was half term. The area around Braunston and Napton is a real focal point for canal users. Of course, half term means that the hire boats are out in force with families hampered by children of school age. It also means that grandparents who own a boat will be using it to help ease the pain of childcare duties, students will descend in gangs for a floating party palace and a fine weekend will ensure that every other stay-at-home boat owner will decide this is a good time to “have a run out in the boat”.

On Monday morning, having moored at Ventnor Marina again, we only had the ten Stockton Locks between us and Long Itchington. As we caught up with a nice family, returning from their first narrow boating long weekend, we got through more quickly than usual. We were moored up before noon and on our way down to the house. The carpet fitters were in and working well so we left them to it to start a quest for curtain poles, toilet brushes holders, outside lights and many other deeply exciting things associated with moving back to a bricks and mortar lifestyle. From here on in the focus will be back on land and the rest of the week was a series of deliveries, meetings and estimates from tradesmen of various kinds. We need accounts for gas, water, electricity, broadband, digital TV. That means we need a TV aerial and we want to make sure the lawn is looked after with some continuity when we are away for extended periods etc.

We had arranged for the boat engine to be serviced on Wednesday, something I had intended to do myself but ended up deciding was one ball too many to juggle, particularly with the difficulty I had already found in getting the right parts. Assurances from RCR (River Canal Rescue – the AA of the inland waterways) that they could be obtained with ease from knowledgeable staff at Halfords had proved woefully over-optimistic. Getting a professional to do the service and bring the parts with them was an easy solution. This kind of service on the canals always comes with a ‘character’ and this was no exception but looking past the beard, tattoos and ponytail we had a full service, answers to any question that may have been concerning us and a willingness to share the knowledge without reservation.

All this took time, however, with no regard for other plans we might have. Emptying the cassette could be done by car but we really needed to top up the water tank. This is built into the hull so we can’t pop it in the boot and run it down to the nearest water point – the boat must go to the mountain. Finishing up around four thirty in late October meant casting off at ten to five to head down to Bascote Locks, pass through the staircase at the top, wind (turn round) in the pound there, come back up through the staircase, call in at the water point at Bascote Bridge and then cruise home to the mooring at Long Itchington. A two hour excursion to get back to where we started, with the only gain being enough water for a cup of tea in the morning. As we only completed filling up at six forty-five the last half hour was a case of navigation by torchlight. It is surprising how difficult it is to moor a narrowboat in the dark. Even with a bombers’ moon, while the light may seem bright as day it is entirely monochrome and the slightest shadow becomes pitch black. As we finished tying up I heard somebody suggest that we had earned the right to a stiff drink and to let somebody else do the cooking so we repaired to The Two Boats Inn.

While the engine service was in progress we did pass the time of day with another boater who walked by. They were out of nearby Ventnor Marina and had come out for a single day on Sunday. However, they owned a cat which had met a dog and had ended up 40 feet up a tree by the towpath. It had been up there for two days. On day two they had arranged for the RSPCA and the Fire Brigade to attend. Neither had had any success so now they were waiting for a tree surgeon to arrive about five 5 o’clock on day three. They didn’t know how he could help but were now clutching at straws.

We met the tree surgeon in the Two Boats that evening, dining out on the tale of derring-do that surrounded the cat rescue. Apparently, he had begun his ascent using a steel ladder, clad in High Vis and wearing Kevlar chainsaw gloves and a hard hat with full face visor. The cat, by now exhausted, starving and dehydrated, had at first watched his ascent listlessly but warily. The tree fella reached out for the trapped animal, which promptly spread all four paws akimbo and attempted to glide to safety, rather than face the approaching demon. Inevitably, gravity won. Despite the extended surface area the cat plunged forty feet into the blackthorn thicket below. Nonetheless, we were assured that neither pet nor rescuer were harmed in this endeavour and the animal was now safely back in the care of its owners, now happily free to return to their home mooring.

We couldn’t really delay the evil day any longer. Our worldly goods were scheduled for delivery from store on Thursday and expected to be with us by about one o’clock. Their arrival would signal the start of a lot of hard work over the next few weeks. Unpacking would be only the start. That would lead to a whole slew of decisions and actions about where to put furniture, how to hang which pictures, what we had to put in place (like a garden shed) just to take stuff that the new house had no home for and whether to hang on to stuff that clearly didn’t fit here or what to do with it. It felt as if it would be a long time before we were free to look much beyond the house concerns.

Two large removal lorries arrived on time and one was emptied and gone by about four thirty. The other was only half empty that night and stayed over to complete the job in the morning. To be honest, we thought we had substantially failed the downsizing challenge in choosing this property. Looking at piles and piles of boxes and dismantled furniture crammed into every room, as the removers drove away, it was clear that our old house had been far bigger on the inside than either of us had realised.

Depending on how you count them, discounting time spent away on holiday etc., we had now been homeless and afloat for just about 100 days. We have reached the end of that voyage and are looking forward to a new one in the spring.

Need to find something?